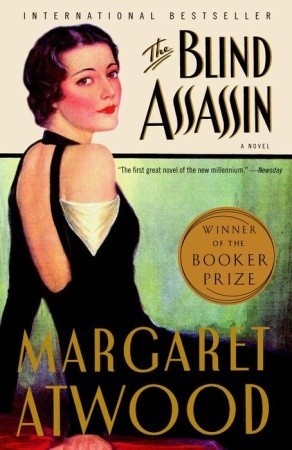 “The Blind Assassin opens with these simple, resonant words: “Ten days after the war ended, my sister Laura drove a car off a bridge.”

They are spoken by Iris, whose terse account of her sister’s death in 1945 is followed by an inquest report proclaiming the death accidental. But just as the reader expects to settle into Laura’s story, Atwood introduces a novel-within-a-novel. Entitled The Blind Assassin, it is a science fiction story told by two unnamed lovers who meet in dingy backstreet rooms. When we return to Iris, it is through a 1947 newspaper article announcing the discovery of a sailboat carrying the dead body of her husband, a distinguished industrialist.

UGH I AM SO BEHIND UGH. Anyway, I had an interesting relationship with this book. It took me longer than usual to get through it, for a book of its length, because I found some portions of it to be dull, others rather engaging, and it really didn’t pick up steam for me as a whole until about the last third of the book. The end, though, was so fantastic that it basically made up for any of the earlier sections of the book that I wasn’t as fond of.

There are three interweaving narratives. Two of them are directly told by Iris Chase Griffen; one is her retelling her and her sister’s coming of age and, essentially, her memoirs leading up to the present, and the second is the present as an elderly woman. The retrospective is told without much editorializing from present-day Iris; it’s in the current sections that she discusses regrets and consequences in perfect hindsight. The third narrative is a seemingly out-of-place story of an unnamed man and woman meeting in secret. It’s a story about them, but it also includes a fantastical sc-fi tale of aliens, human sacrifice, and yes, blind assassins, that the man weaves at each new tryst. It eventually becomes clear that this story is text from “The Blind Assassin,” Laura Chase’s breakout novel.

Part of the reason that it took so long for the novel to come together for me was how seemingly disparate the stories were, at first. Obviously the two “parts” about Iris made sense together, but there was an uncomfortable tension arising from the suspicion that somehow, when the two finally converged, we’d find out a big secret about Iris. This kind of tension can be a great thing, and it was, for a time (and it eventually paid off!) but it can also seem really belabored if the pacing is inconsistent. For me, it unfortunately was a bit inconsistent, and I spent some time thinking, “Get to the point!”

Despite all that, when I think back on the novel now, I think of it as a net positive experience — that despite having a hard time getting through parts of it, my suspense (it’s not a thriller, but suspense is there nonetheless) was rewarded enough to merit the occasional frustration. I definitely recommend this for Atwood fans who haven’t read it yet, but for those who may be new to Atwood, it might be difficult to start here. It’s an interesting mix of sci-fi (in “The Blind Assassin” Incepto-novel,) historical fiction, and contemporary fiction and ultimately succeeds at blending them, but it can seem, at first, a little needlessly ambitious.

One thought on “alwaysanswerb’s #CBR5 Review 58: The Blind Assassin by Margaret Atwood”