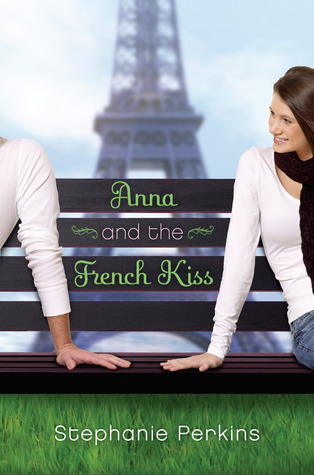 Anna Oliphant doesn’t want to go to school in Paris. She’s not sure why her father (who basically seems to be a thinly veiled parody of Nicholas Sparks) has enrolled her in a boarding school there. She had perfectly nice life in Atlanta with her mum and little brother, a great best friend, a very promising crush on one of the guys she works with at the local multiplex. Now she’s a continent away from everyone she loves, surrounded by clever and cool teenagers who all know the school really well. She doesn’t even speak French! Then she meets Étienne St. Clair, who is helpful, generous, charming, smart and gorgeous. Of course, he has a girlfriend. And even if he didn’t, her new friend Meredith also obviously has a crush on him. So Anna is unlikely to experience any French kissing from him, right?

Now, at the start of the book, I was torn between wanting to slap some sense into Anna, and give her a hug. Her excessive whining that her pompous, somewhat emotionally unavailable, but very rich father has see fit to send her to a posh boarding school in Paris, one of the most beautiful cities in the world, is pretty much what you’d find in the dictionary as an example of first world problem. Yet at the same time, she’s never been away from home before and she’s an insecure teenage girl, and now she’s half a world away from everyone and everything she knows, in a foreign country full of culture and sophistication. It speaks to her dad’s cluelessness that he’d send his daughter to a boarding school in a country where she doesn’t even speak the language. As someone who voluntarily moved to Scotland to go to University when I was eighteen, and had some pretty big culture shocks, I can understand and symphatise, because Anna’s situation is so much scarier.