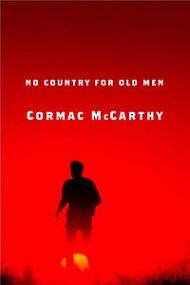 “I think if you were Satan and you were settin around tryin to think up somethin that would just bring the human race to its knees what you would probably come up with is narcotics.”

I don’t think I’ve ever said this before, but this is actually a case where I preferred a movie adaption over the original novel. Here’s why, I think:

This novel is incredibly bare bones and straightfoward (which I know is McCarthy’s style — no quotation marks, run on sentences, little to no description). Pretty much everything is advanced in dialogue and short paragraphs describing the action. The movie adapts the book very faithfully — almost no changes. In fact, the first quarter of the book or so seems more like a screenplay than a novel. But the movie is able to flesh the characters out, and give the viewer some scenery, which McCarthy does not do. For instance, he limits his description of Chigurh to simply dark hair and blue eyes while the movie version of this sociopath is one of the creepiest and memorable characters I can think of.

But that’s not to say the novel isn’t good. McCarthy’s tale of an at-heart good man who makes the decision to take a briefcase full of money from the scene of a drug deal gone wrong, only to be chased down by a psychopath and a close-to-retirement small town sheriff is riveting and incredibly fast paced. He breaks up the novel with interludes from the sheriff’s perspective, thinking back to some events he lived through in World War II.

The novel makes some very good points about human nature, and good vs. evil, and getting older, that resonate well. But reading the book really just made me want to rewatch the movie (yet again).