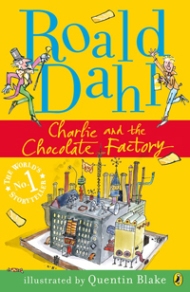 I know the story of Charlie and the Chocolate Factory. I’ve seen the 1971 Gene Wilder version, presumably conceived by a Hollywood writer the night he found the last of his acid horde from the 60s, or the 2005 spectacle that starred Johnny Depp, because Tim Burton’s phone has been stuck on redial since 1990. But I had never read the book until now, and I have to say that neither of those films prepared me for the horror within those pages. Maybe horror is too strong a word, but let’s just say I raised an eyebrow more than once.

For the two people out there who might not have read the book or seen the movie, Charlie and the Chocolate Factory is the story of a poor kid named Charlie Bucket who lives with his parents and four grandparents in a house so small that the grandparents all have to share one bed, and they are so old that they haven’t gotten out if it in twenty years (Horror #1: Remember that guy in Se7en who was strapped in bed for only a year? Uh huh.). Local recluse and chocolate maker Willy Wonka holds a contest: the five children who find the golden tickets hidden in candy bar wrappers will be invited to visit his chocolate factory. Charlie and four obnoxious kids are the lucky winners, but on the day of the event, each of the four brats becomes a victim of his or her own bad habits as Wonka picks each one off with the help of his henchmen the Oompa-Loompas. Charlie, the only visitor who hasn’t self-destructed, is rewarded not only with a lifetime of chocolate, but a pink slip to the factory. And all because he was too poor to develop any really bad habits.

I’m being unfair. Charlie’s a good kid and deserved his reward after all he’d been through. And those kids were bad. . . just look at Augustus Gloop, a child so fat, he. . . well, hang on. From the illustrations in my book, Augustus would be considered “husky” by American standards in the 21st century. But he was definitely gluttonous, and he gobbled up the chocolate from the chocolate river in spite of Wonka’s warnings until he fell in and was sucked up the pipes, while the Oompa-Loompas stood by and sang. “However long this pig might live / We’re positive he’d never give /Even the smallest bit of fun / Or happiness to anyone.” Whoa, Oompa-Loompas! Pretty harsh, there.  He’s fat so he’ll never bring any happiness to anybody? I think some sensitivity training is in order in Wonkaland. Although I don’t think Mr. Wonka himself would be the one to give it, since he has the sensitivity of a jackhammer. At one point he looks at Charlie and says, “You look like a skeleton! . . . Hasn’t there been anything to eat in your house lately?” Good one. Mock a starving child while you sail down your river of chocolate. Let them eat cake, indeed!

I suppose the Ooompa-Loompas have cause to be bitter since their boss keeps them strung out like crack addicts. Just listen to Wonka’s description of them when he first came upon them in Loompaland, “They used to dream about cacao beans all night and talk about them all day. You had only to mention the word ‘cacao’ to an Ooompa-Loompa and he would start dribbling at the mouth.” So what did Wonka do? Offered to bring them back to his factory where they could gorge themselves on cacao beans; he even offered to pay them in cacao beans! Great, Wonka. Why not just pimp them out for a bag of M&M’s and a shot of creme de cacao? I think you have the Oompa-Loompas confused with Jennifer Connelly at the end of Requieum for a Dream. (Horror #2)

Violet Beauregarde is the next guest to meet with an accident, and she had it coming to be sure. She insisted on trying the chewing-gum meal even though Mr. Wonka told her repeatedly that the gum wasn’t ready. So she blew up like a blueberry and the Oompa-Loompas sang about how she should have listened to her elders and not taken something that didn’t belong to her. No, wait. Apparently they sang about how disgusting her gum-chewing habit was. So the blatant disobedience wasn’t so much a problem as the “repulsive little bum / Who’s always chewing chewing gum.” Okay, whatever. But why does Wonka even make chewing gum if he thinks it’s so disgusting? Man, I wish somebody had asked him that. . .like Mike Teavee did as they were leaving the chewing gum room! Great! I’m sure Mr. Wonka has a good answer and doesn’t just accuse Mike of mumbling and keep walking away.

After a brief sidebar about fizzy lifting drinks, drinks so light that they rise you up in the air and you have to burp to get down (gum-chewing is cause for eternal scorn, but burping is perfectly lovely), Veruca Salt is lost. Veruca was a spoiled brat and her parents were equally insufferable, so if a bunch of squirrels want to toss them down a garbage chute, I think we’re all okay with that. And finally, we say goodbye to Mike Teavee, who watched a lot of TV. Boy, if Roald Dahl were alive today I shudder to think what fate might befall the boy who wouldn’t put down his smart phone.

The candy maker himself is such a collection of mental symptoms that you could open the Diagnostic and Statistical Manual of Mental Disorders at random and find something that applies to him.

So why am I giving this book four stars? Because it’s refreshing—and I mean this in all seriousness—to read a children’s book as bold and unsanitized as this. Written in 1964, Dahl was unfettered by our twenty-first century sensitivities. You couldn’t call an overweight child names today without getting parents up in arms, and if a child were shrunk by a giant antenna, the Wonka Corporation and its CEO would find themselves at the end of pretty lawsuit not to mention reckless endangerment charges. So yeah, this book is nuts, but I suspect they just don’t write them like this anymore, and that makes it worthwhile.