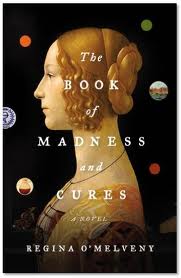 This novel, set in Europe at the end of the 16th century, tells of a daughter’s quest to find her father as well as herself. Gabriella Mondini is a Venetian doctor who learned her skills by her father’s side and was accepted (begrudgingly) into the Venetian doctors guild as long as her father was her patron. When the story begins, Gabriella’s father has been gone for 10 years and the guild has terminated her membership. Dr. Mondini had been working on a book of disease with Gabriella, and when he left, he took it with him, leaving his daughter without her father, her patron and her work.

Mondini sent occasional letters to his daughter as he traveled, and over the years, he became more and more lax with providing dates or cities from which he wrote. Moreover, the content of his letters became increasingly confusing and distressing. What really drove him away? Was it a desire to learn more of disease or was it to hide his own illness? When she receives a final message from him, without date or point of origin, telling Gabriella that he will not return and she should not look for him, Gabriella, naturally, resolves to find him. She gathers up her servants Olmina and Lorenzo, her own book of diseases that she has been recreating from memory, and bids her unsupportive and shrill mother good-by. Gabriella retraces her father’s steps through Europe, starting with his first letters, which did indicate cities and fellow doctors whom he had consulted.

The novel follows her journeys through a year and reveals much about the unstable political political situation in Europe, the widespread suspicion of “healers” as opposed to doctors (who seem to be purely intellectual in their pursuits) and particularly of women. It also shows Gabriella’s own development — is she mad to pursue her father, who seems to have left behind a dubious reputation in the cities he visited? Interspersed throughout the novel are excerpts from Gabriella’s book, which is largely about psychological and emotional disorders. Melancholia, loss of desire, invidia (the invisible worm that consumes the heart), the “repugnance of closed space” — how many of these maladies, which frequently defy cure, afflict Gabriella and her father?

I admire the authors’ ambition in covering so much ground — geographically, historically and psychologically. Her characters travel through Northern Europe, Scotland, France, Spain and North Africa on their odyssey, and O’Melveny does a fine job of showing the political, social and cultural atmosphere of these places. I wasn’t sure how I felt about Gabriella. At times I thought her impetuous and selfish, but this is perhaps reflective of her class and upbringing. I found the story arc to be satisfying without stretching the credulity too much, and the writing is lovely. O’Melveny is a poet and it comes through in her novel.

Some women think of love as a rising thing, but I’d always known it as a descent where I might lose myself or my beloved. A sweetness and then a severance greater than original solitude. And so I feared joy. Yet there in the library [we] climbed the bright ladder of the body, as if it were sky and we a deafening, twisting flock of birds that could never fall to earth.

This was a pleasurable read. Recommended for those who have read and enjoyed the novels of Sarah Dunant and Geraldine Brooks.

One thought on “ElCicco #CBR5 Review #2: The Book of Madness and Cures by Regina O’Melveny”