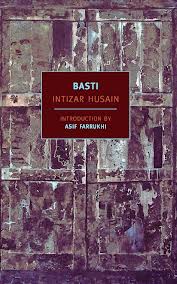 Translated from Urdu by Frances W. Pritchett, with introduction by Asif Farrukhi.

Basti is a novel set amidst upheaval in Pakistan, particularly the partition and emigration of 1947 and war in 1971. This classic of Urdu language is not so much a political novel as an existential one. When Basti was published in 1979, Husain, one of the most respected and celebrated authors writing in Urdu, received some criticism for not taking a side or offering any answers. But Husain has written a novel not about war and politics but about man and what happens to communities (basti) in times of upheaval. He examines what is happening to man in the modern world.

The overriding theme can be summed up in a line from the Quran which is repeated throughout the story: “I swear by Time, man is surely in loss.” As the main character Zakir, his family and friends endure political upheaval and war, they both witness and demonstrate how man changes and becomes less generous, less connected to those around him. Husain’s work is filled with references to Islamic, Hindu and Buddhist literary and religious works that touch on these points. While it would help the reader to be familiar with the history of India and Pakistan as well as these works, the translator provides useful detailed notes and a glossary to help those of us who are not. And not knowing will not prevent the reader from understanding Husain’s larger point or enjoying his beautiful writing.

Basti is told from the point of view of Zakir, a middle aged history professor in the fictional city of Vyaspur (which stands in for Lahore). It is late 1971, the time of the Indo-Pakistani war (there have been several; the 1971 conflict led to the independence of East Pakistan/Bangladesh). As Vyaspur suffers the effects of war, Zakir reflects more and more on his past in the small village of Rupnagar, where he grew up and his family home is located. Husain assumes readers would know about the emigration of 1947, when the British partitioned India into India and Pakistan, the new Muslim state. This resulted in massive emigration for Muslims, Hindus and Sikhs. Zakir’s family, like many other families, was divided due to partition. Eventually, those family members in East Pakistan were cut off from those in West Pakistan. Husain’s main characters, however, seem not to feel directly involved in the politics of their time. They don’t overtly take a side in politics or war. They seem more like spectators than actors. When Zakir takes tea with his friends, they discuss what is happening without shedding much light on it, as they themselves seem to feel in the dark and unable to have any impact on the situation. At one point, Zakir tries to convince his father that conditions are improving in Vyaspur and beyond, and his father responds, “Son, if conditions improve, it means nothing. People’s deeds have to improve.” It’s not until the very end of the story that Zakir feels that he ought to have done something, that he is somehow responsible. One action that he takes is to keep a diary because, “I ought to preserve the record of my lies and cowardice.”

Husain’s writing has passages involving stream of consciousness, as Zakir takes trips down memory lane and reveals bits about his past and about religious and philosophical thought. This is where some familiarity with Islam, Buddhism and Hinduism would serve the reader well. This is also where some of the loveliest writing is to be found.

The rain poured down all night inside him. The dense clouds of memory seemed to come from every direction. Now the sky was washed and soft. Here and there a cloud swam contentedly in it, like a bright face, a soft smile.

Kudos to the translator for weaving these various threads together into a lovely whole tapestry. Ideally, novels are read in their original language, but few of us will ever know Urdu and it would be a shame to be deprived of Basti and its timely message about man’s disintegrating relationships within his community.