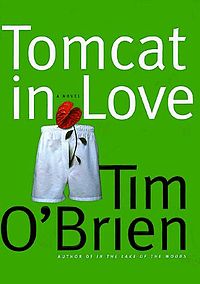 Tomcat in Love is a great book because Tim O’Brien is a great author. He can pull off just about anything, and here he’s pulling off a romantic comedy. I say, “pulling off,” because creating a legitimately funny romance is hard to do, we haven’t made much progress since Shakespeare. The pursuer is Thomas H. Chippering, an Abe Lincoln look-a-like who has convinced himself that he is God’s gift to women. His ex-wife, Lorna Sue, is the pursued. To Thomas, she is female perfection, and he has to win her back while enacting revenge on the man who stole her away, “the tycoon.” He is assisted by Mrs. Robert Kooshof (her husband is in prison), who finds him crying in her backyard one afternoon, and decides to take him in.

What makes this novel great is O’Brien’s style. He creates a novel that theoretically could happen, there are no fantastical creatures or alien overlords, but it’s a story that would never happen. O’Brien’s novels are hyperrealistic, everything seems real until you look a little closer and you realize the details are exaggerated and what’s there is just representative of something real. O’Brien could write the same story about love and passion as an ordinary drama, but what makes Tomcat in Love so enjoyable to read is that it’s so darn strange. When characters are punished, it’s an event. When revenge is carried out, it’s war. When a character falls in love they’re in it for good.