My fellow cannonballers have suggested I stop torturing myself and just give up on Neil Gaiman, since it’s clear he’s not my sort of author, and The Wake has motivated me to finally do precisely that, I think. Having finally finished The Sandman, I can say, without any reservations, that I didn’t care for the series as a whole.

The Wake, for the most part, spends its time running through all the characters we’ve gotten to know over the course of the series and showing their reactions to the death of Morpheus, and I realized that I didn’t care for, or about, any of them.

Certain volumes might trick me into liking them momentarily – I did like volumes 1-4 and 7 (varying amounts) – but, in the end, I don’t care to read or remember them and their stories. Were it not for my being a completionist, I wouldn’t have even stuck through till the end.

Partly because of a disinterest in the over-arching story and characters as a whole, and partly because I find Gaiman, more often than not, lacking in those regards and many more. He has the potential in him for, say, aMirrorMask, which is to say he can write something where I’ll see it and, for a moment, understand why he gets so much praise as to be treated as infallible, except it’s not worth it drudging through the rest in the hopes of finding that rare pearl amidst the pig shit.

So, like Joe Hill, Lisa O’Donnell, and Chuck Palahniuk before you, I’m breaking up with you Neil Gaiman, and it isn’t you, it’s me.

Don’t be fooled into thinking this is a graphic novel, as I was. The Dream Hunters is, in reality, more illustrated short story. It exceeds the 100 page minimum for Cannonball Read by 20+ pages, but I’m still not sure it truly qualifies for inclusion. I’m reviewing it anyway.

The Dream Hunters, being so short, can be summed up with the utmost ease. The story is a folkloric tale about a fox who falls so deeply in love with a monk that she’s willing to sacrifice herself in order to allow him to go on living. And it reads like your run-of-the-mill piece of folklore, which is to say it progresses predictably and there are no flourishes to set it apart from the folklore that inspired it.

Neil Gaiman may’ve gotten the idea for The Dream Hunters during his time working on the script for the English-dub of Hayao Miyazaki’s Princess Mononoke, but he should’ve taken more notes from Miyazaki on how to successfully contemporize traditional folklore.

It would’ve prevented Yoshitaka Amano’s considerable talents, AKA the sole reason this avoided the lowest rating, from being wasted. I’d rather have bought Amano’s illustrations separately and made up my own story to fit.

Gaiman doesn’t even make much of an effort to tie it into The Sandman.Morpheus makes an appearance, and he earns himself a four page (fold-out) spread, but he’s really just a bit player, meaning The Dream Hunters fails at a contemporized work of folkore and as an entry in Gaiman’s famed series. Who it’s meant to appeal to, I’m not sure. I just know it sure as hell isn’t me.

The longest entry in the series, The Kindly Ones could’ve, and should’ve, been longer. Gaiman throws a lot at the wall in this volume, and none of it gets the chance to stick. The Sandman has been known to weave together a number of different threads, but here it’s patchwork, like an unfinished quilt.

One made with some especially off-putting thread (i.e., the artwork). The Sandman is known for its consistently excellent art. The artists vary, yet the style remains more or less the same. Until now. Coming from the detailed art of the earlier volumes, The Kindly One’s minimalist approach, with its thick lines and overall cartoonishness, makes for a harsh transition.

And for a pesky distraction. The further in I got, the more of the artwork I saw, the worse it grew. The Kindly Ones would’ve had to’ve been the literary classic it was made out to be in order to balance things out. It wasn’t.

Like I said, The Kindly Ones is disjointed and underdeveloped. Best of the series, as I’ve heard? Hardly.

Build me up, then break me down. Why, Neil Gaiman? Because you excel at it. Here I was thinking the wheels were turning once again and there would be no more pointless side-ventures to distract us from reaching our destination, then out comes Worlds’ End, another of your short-story collections thinly disguised as being part of The Sandman series.

There was a certain novelty to that the first time around in Dream Country. I wasn’t yet bemoaning the whole idea of a breather, of filler, two words which aptly describe these particular volumes. Thus, I was more receptive to the stories and, at that point in time, to the series as a whole, the disappointments having yet to pile up.

With Fables and Reflections, though, I became instantly dubious of any other such installment, and Worlds’ End went to show why. This time, Gaiman barely even makes an effort to tie these stories into the lives of his characters. They’re the frame to this story, and that frame is rather thin and dinky, for lack of a better word.

So if, like me, you read The Sandman for its characters, and to see the plot move forward, little would be lost if you were to skip out on Worlds’ End and move onto the next volume. I’ve not yet read it myself, as my forced move back home to Butler left a pricey, hour-long bus ride between me and the final two volumes, the Butler library not carrying a single entry in the series, but I’m sure it’ll be refreshing when placed alongside these recent disappointments. 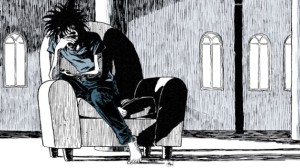 Could this Neil Gaiman penned series have nothing left on offer for me? After two straight misses, it seemed my interest in both Gaiman and The Sandmanhad waned to a flicker. This had been the one creation of his I could rely upon, turn to when I wanted reminded why it is that this man is popular to begin with, which is to say he’s no hack, rather he just does a good impression of one on occasion.

Brief Lives wasn’t as redemptive a work as I’d hoped for, but it did rekindle my interest in the series. I think it’s because Gaiman forwent the more convoluted machinations of the previous volumes and went a simpler route, turning in what amounts to a buddy comedy starring Dream and Delirium. In the universe Gaiman has constructed, there don’t exist two more perfect foils.

Thanks to their playful banter, Brief Lives avoids succumbing to the mistake of it predecessors, which is letting the story get bogged down by convolutions and/or bleakness. The Sandman will never fully relinquish its moodiness, as displayed by the ending of this installment, but it’s at its best when it has some heart and humor to balance the equation out.

It’s also best if it sticks to the overarching plot, which I’ll say more about in my review of the follow up to Brief Lives. When your series carries the name of one of your characters, and when he is the most fully-realized and attention-grabbing of all your characters, don’t banish him to the outer-edges of your story. Let him drive it, like he does here, and good things are bound to happen. 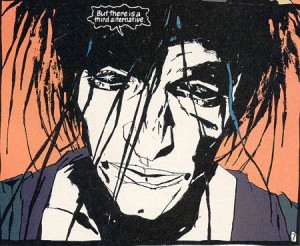 Like the volume before it, Fables & Reflections has little bearing on the larger, over-arching story of the series. It’s presented as a series of short stories which involve the characters we’ve come to know and recognize, yet in a regrettably limited capacity. As a result, it hardly felt like I was reading another entry in The Sandman.

Rather, it felt like Gaiman taking an assortment of familiar figures and stories, giving them a slight, hardly noticeable tweak, throwing in a character or two from the series, and calling it a day. For example, “The Song of Orpheus” is, for the most part, a standard retelling of that particular myth. One I’d already seen realized in more impressive fashion by CMU’s Scotch ‘n’ Soda theatre group.

Gaiman loves to take the old and make it new, but here it’s more blatant, and far less successful, than usual. So if you’re reading the series, nothing of worth would be lost by skipping this and moving onto the next volume. I wish that’s what I had done. Though, I’ve yet to read it myself, so it could just as well continue where the last two left off, disappointing me. I guess we’ll just have to wait and see.

Since Stardust didn’t grab me in the least, making that the second of Gaiman’s books that I abandoned in the early goings, I went back to the well that hadn’t failed me yet: The Sandman. I guess it was inevitable, given his track record with me outside of it, that I would find disappointment in the series eventually. So better it come now, early on, than later when my expectations have been built up to a much more considerable height.

A Game of You, the fifth volume in the series, is what occurs when Gaiman makes things up on the fly. You end up with a contrived and slapdash plot that strains the reader’s suspension of disbelief until it, at least for me, snaps. When you’re writing within the fantasy genre, that’s saying a lot, don’t you think?

On top of that, A Game of You doesn’t even try to be subtle about its references and inspirations, ham-fisting more than a few in just for the sake of doing so, and focuses on a group of characters, each duller than the last. Even Morpheus himself, who doesn’t appear until the end, where he serves as one, grand deus ex machina, is not his usual likable self.

He’s overly argumentative and takes issue with things I don’t see why he couldn’t forgive, his dialogue cyclical due to his general stubbornness. Still, he’s a welcome presence compared to the others, Wanda in particular. She’s a pre-operative trans woman, which should provide ample dramatic tension, and yet I felt as if it was hardly touched upon.

That is, until Gaiman uses it rather manipulatively at the end in a transparent attempt to make his readers cry for a character that he’d given them no reason to care about prior to that.

Honestly, I’m just glad to read that the events of A Game of You have little bearing on the rest of the series, and that it’s generally agreed upon that it’s the worst entry. With it out of the way, I feel the chances are good that I’ll make it through the remaining six installments without finding another stinker. Well, one can only hope.