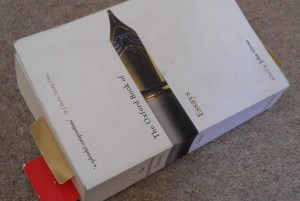 After reading 5 essay collections more or less in a clip, I figured I’d suck it up and go hard on the form. The OBE is 680 pages of pure essaying goodness in the English language, so no Montaigne, though his shadow obviously lingers over the result. Kicking off in 1625 with Francis Bacon chewing over the truth, and winding up rather oddly with Clive James in 1980 snarking about Judith Krantz. I read them side by side, deciding to take a double-pronged approach to the book (see illustration), flicking between the back and front. This made for some odd combinations, like Bacon’s essay deflating the snarky jibes of James – I guess the latter had to be included, given his reputation at the time, but he hardly shines having a go at a pulpy author. In my mind I edited it out, choosing as a better addition this delightful recent piece by Tim Krieder as a better finale, or the second to last work, Joseph Epstein’s wonderful About Face.

Henry Fielding and James Baldwin, Jan Morris and Charles Lamb, Lewis Thomas and Lord Macaulay – it made for entertaining combinations. Subjects veer all over the place, though it’s unsurprisingly dominated by old white dudes, there’s a mutual disdain for sentiment and love of language throughout. All the best display a commitment to specificity and generosity of mind, though I found the most joy in strange places: the natural history coverage (especially Loren Eiseley’s The Snout), Reyner Bayham on the potato chip (or crisp for the limeys), Macaulay on Clive, and the grace and wit of authors in places I wouldn’t expect. Some of my favourites  I relished and saved up as reward for getting through a particularly tough bit of Victorian theology – MFK Fisher on Young Hunger, Joseph Addison’s Sir Roger, Pauline Kael on Movies on Television. I read a lot of people I’d never dared try before – William James wasn’t as scary as I thought he’d be, neither was John Stuart Mill or George Santayana. Two selections defeated me – David Hume and James Anthony Froude. The Froude bit was on the philosophy of Christianity, and there seemed to be a lot of God in the selections, even the second Mencken essay chosen was a weak one dealing with archaic gods. I know religion is a Big Deal and all, but I did allow myself a cheer when I got to Twain having a go at the All-Powerful Creator for inventing the fly.

Some of the pieces have dated badly – Elizabeth Hardwick’s The Apotheosis of Martin Luther King made me cringe, and throwing in Baldwin’s sublime Stranger in the Village doesn’t do enough to make up for the overall disinterest in racial politics. Snark and pessimism ages badly (James Stephen on Joyce: “the English language doesn’t permit more than a spoonful of pessimism – to be well shaken before taken – for it isn’t built that way”), and Hazlitt’s On the Pleasures of Hating testifies to that: ultimately the old curmudgeon doesn’t convince, even though he was one of the finest writers ever, he’s writing himself in to a corner.

Looking at the whole thing from a distance, there’s a lot of theology and ethics, a smattering of theatre/arts writing, a bit of politics (loved Walter Bagehot’s Dull Government), absolutely no sports, which I was surprised by, and much on human weaknesses. I finagled the reading so that I’d end with T.S. Eliot, represented by his oddity of self-projection on Marie Lloyd and working class art (and how the mechanical age and movies are killing us with boredom. LOLarious). But it was Katherine Anne Porter’s The Necessary Enemy that I’ve dwelt on, the same way I lingered over Chesterton’s Sandals & Simplicity, or Beerbohm’s A Clergyman. The best essays pack a punch, but also a perfume, to mix metaphors flagrantly. There’s the initial impact, once you’ve wrinkled out the meaning, and then there’s the unexpected gift you take with you unawares.