I feel guilty for disliking The Light Fantastic by Terry Pratchett.  I feel guilty because I was in the audience of one of Terry Pratchett’s panels at The NY Comic Con this year, and Pratchett seemed incredibly sweet and highly intelligent. Sean Astin was the main feature of the panel and he was hugely enthusiastic about Pratchett’s work. Everyone in the audience seemed to be in the Pratchett fandom. So I gave The Color of Magic a try, and now I’ve given it’s sequel, The Light Fantastic a try, and all I’m walking away with is a resounding shrug. The Discworld series is a fantasy answer to Douglas Adams’ The Hitchhiker’s Guide to the Galaxy series (which, for the record, I adore), yet somehow, for me, it didn’t quite work. And I feel awful about that.

I don’t idly mention Adams’ work. Both stories have similar construction, there’s the bumbling straight man who has been thrown into a world he knows nothing about (Adams’ Arthur Dent vs. Pratchett’s Twoflower), his narcissistic friend (Zaphod Beeblebrox vs. Rincewind), and the important item he must travel with (a towel vs. the luggage). Both books have the same dry British wit. Both books poke fun and the silliness of their genre while celebrating it. So many similarities, yet I found myself struggling to maintain interest in The Light Fantastic, which was never a problem for any of the Hitchhiker books.

END_OF_DOCUMENT_TOKEN_TO_BE_REPLACED 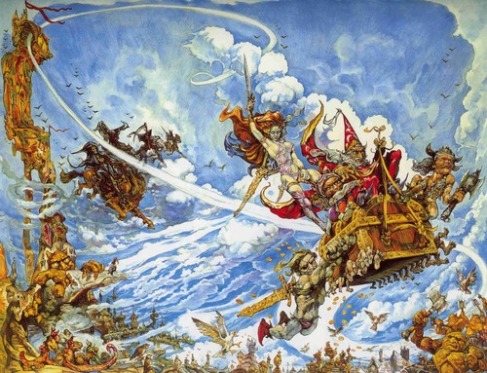 Pratchett and I continue to have an unsteady relationship. He entices me with Good Omens, co-written by him and Neil Gaiman. Thoroughly lets me down with Feet of Clay, my introduction to the Discworld. Re-instills my faith in him with Hogfather. Now, with The Light Fantastic, he’s inspired sheer disappointment once again.

As with Feet of Clay, his humor doesn’t feel as natural as in his other works, inducing far more groans and eye rolls on my part than smirks or laughs. Whatever you point to, though, there are clear signs of this being him just starting out. Even characters I’d consider favorites so far, such as Death, feel half-baked in this installment, like Pratchett wasn’t sure where to go with them. I imagine Death has evolved throughout the series, except I barely recognized him as the one seen in Hogfather, that book’s respective highlight.

Death in beta-format, however, I can deal with; what bothered me the most were the characters created for this particular story arc, namely Rincewind. He’s a wizard minus the magic who spends most of his time wallowing in self pity over this unfortunate fact. Furthermore, his every success seems to altogether be an accident or wholly due to luck. In short, he’s the embodiment of the worst aspects of Harry Potter, yet blown even further out of proportion, and thus a character I haven’t even a passing interest in following.

Maybe my opinion would’ve been different if I’d read The Colour of Magic first, giving myself the necessary background information on this story and its characters. I must say, though, the chances are slim if the reviews I’ve read are anything to go off of. The Light Fantastic is widely considered to be a vast improvement upon its predecessor, and Rincewind is just as popularly referred to as one of Pratchett’s worst character creations. If anything, it would’ve made me biased against the book from the start. Still, I feel that I owe it to Pratchett to read it… at some point. Just not anytime soon. I at least have to read Making Money first. It should even out the scales, balancing the good with the bad, and make The Colour of Magic easier to swallow.