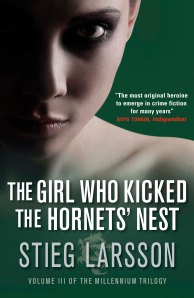 I just… I can’t…… I don’t……. I HATE THIS BOOK. Read the full bilious outpouring on my blog here.

Leena Lehtolainen is a Finnish writer who has had success in her native land with a murder mystery series featuring detective Maria Kallio, the lone female in the violent crimes unit of the Helsinki Police Department. The author highlights chauvinism in the department and in society at large, along with the capital’s problems with drugs, prostitution and other illegal activities involving shady types from Estonia and Russia.

Maria is trying to decide where to go in life and with her career. She had been in law school but turned to police work as way to help people. But with this stint in violent crimes, dealing with rapes and murders and an alcoholic boss who is frequently out on leave due to his problems, Maria is losing her taste for the work and considering going back to school to finish her law degree.

The case that falls in her lap involves a group of people she once knew. A former roommate’s boyfriend has been murdered at his summer villa while spending the weekend their with choir friends. Tommi had been a ladies man, successful engineer, from wealthy family. Was it a jilted lover or a jealous boyfriend? As Maria conducts her investigation, she discovers details about a life that even his closest friends had little knowledge of. Did one of them do it or was it some gang-related murder?

As murder mysteries go, it was an okay book. This is the first of a series, and I feel like authors need 2-3 under their belts before they really flesh out their characters. There are a few who will clearly be around — her drunk boss, her good-humored and hard working sidekick, the possible love interest. The suspects in this novel were an interesting bunch, each with some reason to love and hate Tommi. The details about crime and culture in Helsinki were adequate, but I think I have been spoiled by Stieg Larsson. When I think of Nordic crime thriller, I expect a little more these days. Larsson’s Girl series was brilliant and would be a better choice for people who want gritty, complex characters and crimes. This is more of an airport read — something to pass the time when you can’t be doing what you want to do. I wouldn’t rush out to read the next one, but if it came across my path, I’d probably read it and not mind it.