The film based on Serena is going to be Jennifer Lawrence and Bradley Cooper’s follow up to their Oscar nominated/winning The Silver Linings Playbook, and I wanted to check it out mostly for those reasons. I follow a lot of Hollywood trade news via blogs, and when they were casting for Serena, there was a lot of buzz about how this movie provides a meaty, unique part for actresses that they rarely seen. The idea of a strong, female character was enough for me to check it out of the local library.

And the book certainly lives up to the strong, female character buzz.  Serena is beyond your typical strong female, she’s terrifying. She’s ruthless, she’s single minded in her ambition and she will stop at nothing. She feels conniving, and manipulative, and immoral, but you can’t help but read in awe as she maneuvers her way through the male dominated logging company towards her goals. And you can’t help but feel unsettled at the disturbing means she uses to get there.

This should not be a boring book. There’s political strategy, action in the form of hunting, logging and a fairly suspenseful chase at the end. There are trained eagles, snakebites, and a number of fairly creative, grisly murders that made my stomach turn. And yet, I was kind of bored. 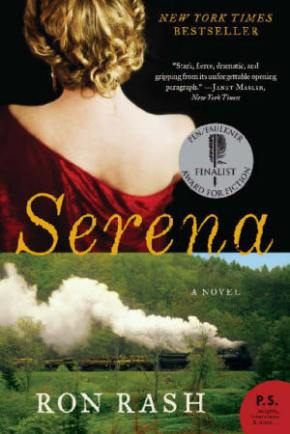 Depression-era North Carolina was a hard place. In the Western part of the state most people worked hard from cradle to grave for very little reward or luxury, regardless of the economic climate. Most families relied on the land passed on to them from previous generations and survived with the bare necessities. The Depression made men more willing to take on dangerous, even deadly work, and logging the verdant timber forests of the Appalachian region was probably one of the deadliest professions of the time.

George Pemberton, is a well-educated, patrician Northerner with wealth to spare. He owns vast tracts of forest in the Great Smokey Mountains, and his goal is to strip the land bare, then move on to the next promising valley and it’s resources. Unlike many of the timber executives working in the Mid-atlantic and South, he chooses to live amongst the loggers in the temporary camps built to shelter, feed and sometimes bury those who work for him. Even the managers whom Pemberton employs, leave their wives back home, because a logging town is no place for a lady. Pemberton satisfies his needs with a young, local girl, Rachel Harmon, who works in the kitchens and delivers meals to his house. Rachel soon finds herself pregnant and is abandoned by Pemberton when he leaves to go back to Boston to bury his father and settle his estate. While back home, Pemberton meets, courts, and marries Serena, a woman with a sketchy past, an impenetrable will and a wild, untamable temperament that makes her pretty much unstoppable, whether she is fighting early environmentalists working to establish National Park lands, or devising plans to separate uncooperative partners from company interests and investments.