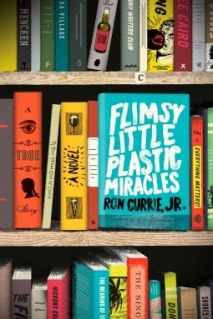 I read Flimsy Little Plastic Miracles right after Kristopher Jansma’s The Unchangeable Spots of Leopards, and they complimented each other to the point of Miracles almost reading like a sequel to Leopards. Both deal with unreliable male protagonists speaking to the reader, men who need some enlightening on matters of women and healthy relationships.

I preferred Jansma’s book, but Miracles is still quite good. Currie’s self-named character somewhat accidentally fakes his own death in the Caribbean, and as a result, his novel becomes a bestseller. He misses the woman with whom he’d lived “pre-death,” and eventually coming “back to life” makes the public unhappy with upending their Lost Genius fiction they’d constructed in his absence. We all have stories we tell ourselves, and facing their inaccuracies is startling.

The earliest known mention of a person enhanced with a prosthesis, believe it or not, comes from the Vedas. We’re talking 1500 B.C., or thereabouts. A female warrior loses her leg, and is given a replacement. We’ve had 3,500 years to get used to the idea, yet when I talk about the Singularity, people still get an indulgent look on their faces, like they’re humoring me and my absurd notions of human beings with brain/computer interfaces and titanium exoskeletons. I mean, they’re polite about it, usually, which I appreciate. But, you know, 1500 B.C. The first time a person was joined with a machine, however primitive. Consider that, I tell them, then ask yourself: Who’s being naïve, do you think?

Also dealing with questions of identity and existing in hiding is Maya’s Notebook by Isabel Allende, released this past May. In it, Maya Vidal alternates between writing about living in Chile with a friend of her grandmother’s, and also the self-destructive path that brought her there. The scenery shifts between Berkeley, the Pacific Northwest, Las Vegas, and Chiloé.

Although the book is nearly 400 pages, it never feels like it goes on too long, and the diary premise never seems forced. Maya’s story hurtles along, and Allende, no matter the location, immerses you in a way where you can nearly taste the weather. And there’s a fair dose of humor too:

The cousin showed up an hour later than he said he would in a van crammed to the roof with stuff, accompanied by his wife with a baby at her breast. I thanked my benefactors, who had also lent me the cell phone to get in touch with Manual Arias, and said good-bye to the dog, but he had other plans: he sat at my feet and swept the ground with his tail, smiling like a hyena; he had done me the favor of honoring me with his attention, and now I was his lucky human. I changed tactics. “Shoo! Shoo! Fucking dog,” I shouted at him in English. He didn’t move, while the cousin observed the scene with pity. “Don’t worry, señorita, we can bring your Fahkeen,” he said at last. And in this way that ashen creature acquired his new name[.]

Both present and past storylines are riveting, and I can see this book also becoming a good movie. It wouldn’t surprise me if the rights have already been sold.

Harley Loco: A Memoir of Hard Living, Hair, and Post-Punk, From The Middle East to The Lower East Side by Rayya Elias

Yes, that title is a mouthful, but this New York memoir from Rayya Elias is an interesting portrait of redemption. At this point in my reading life, I admit to tiring of the addict memoir, but that doesn’t mean that these stories aren’t worth telling. It comes down to the surrounding environment, when I decide on giving the book my attention. It was the post-punk angle that sucked me into this one.

Elias and her family left Syria when she was young, and the rebellious teenager took to drugs in order to impress her tougher classmates:

For the first time I had earned street credibility — not because of my cool cousin, but because of what I had done. I was christened into the club of the psychos[.]

She joins a lot of bands, learns how to cut and style hair, and eventually moves to New York during the 1980s. She rises and falls multiple times, including a stint in prison. Although Elias isn’t the strongest writer, I appreciate that Harley Loco isn’t one of those “hit rock bottom/ climbed out/ everything is fine now” stories. Rayya Elias, though many years sober, shows the reality of her struggle, and how art can transcend addiction.

Full Disclosure: Viking provided me with review copies of both Harley Loco and Flimsy Little Plastic Miracles. Harper provided the review copy of Maya’s Notebook. I thank them for the gesture, and I will continue to be fair with my reviews.