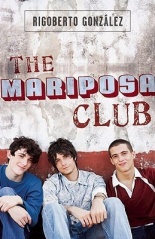 A week or so ago, I discovered a LGBTQ YA reading list on a site (gayya.org) that now seems to be down or having technical difficulties. But the reading list was brilliant, especially since I tend to like reading about gay, lesbian, bisexual, and transgendered people/characters. The list even included poly-themed books, which made me very happy. The Mariposa Club by Rigoberto Gonzalez fell under the trans/bi/poly category on the site, but really it’s about the high school experience of The Fierce Foursome (three gay boys -Isaac, Maui, Lib- and their trans/drag queen friend, Trini). No bi or poly in this one, but still, it was entertaining as all hell.

The premise is simple but misleading: the boys (or girls, as they refer to themselves) are from Caliente, California and come up with the idea to start a GLBT club at school. They encounter (and create) some resistance at the administrative level and though the club is talked about and changes focus (and names) during the course of the book, it never really goes beyond being another name for the Fierce Foursome.

The back of the book says:

“Little do they know that when the town is struck by a tragic homophobic incident that robs the Foursome of one of their own, the entire high school will turn to the Mariposa Club as a symbol of their grief, fear, and hope.”

The back of the book would have you believe that there was only one “tragic homophobic incident,” but really, there were a few – all realistic, all disheartening.  But through it all, the “girls” learn to grow up and take pride in themselves and their various cultures, so that’s pretty damn cool.  It’s not a revolutionary book, but I’m glad to see a ya book that features a trans character in such a positive way.  Trini pulls no punches about being who she is and the book doesn’t focus on how hard it is or the process of becoming her; she just is.  I guess in that way, it is fairly revolutionary for ya fiction.