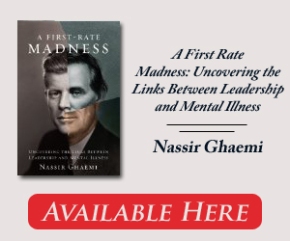 Nassir Ghaemi takes on reverse diagnosing some of history’s greatest leaders in A First Rate Madness.  His thesis boils down to: it takes crazy to fight crazy.  He argues that leaders in history, such as Lincoln and Kennedy, were as successful as they were because of (not in spite of) their mental abnormalities.  Nassir often circles back to Churchill vs Chamberlain to explaining that Chamberlain’s rational mind was not match for Hitler crazy, but Churchill’s depression/addict mind lead Great Britain to (a slow, hard-fought) victory.

Is any of it true?  Who knows?  It’s an interesting thesis, but there is no way to prove any of it.  Reverse diagnosis, 20/20 hindsight, and modern psychiatry imposed on historic (and dramatically history-altering) time periods is asking too much for me.

If you are someone who has an interest in Abraham Lincoln, William Sherman,  JFK, Gandhi, MLK or even George Bush and Tony Blair, then you may enjoy this book.  There are definitely some fascinating tid-bits (MLK attempted suicide as a very young man when he mistakenly thought his grandmother had passed away JFK had quite a regular steroid/amphetamine cocktail a la Mad Men’s episode ‘The Crash’).  But, all in all, not my favorite.