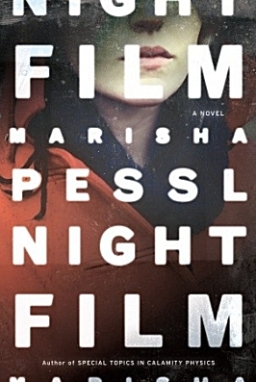 I have been working like a crazy person and squeezing in reading whenever I have time, but I’ve fallen a bit behind on my reviews as a result. So let me start this with the short version, just in case I start to ramble: I absolutely loved this book. Loved.

Ashley Cordova, the daughter of a reclusive and mysterious horror film director, is found dead from an apparent suicide at the young age of 24. She is remembered fondly and her death is seen as tragic, but no one questions the circumstances. Well almost no one: Scott McGrath, a disgraced writer thanks to a run in with Cordova (the elder) years earlier, has a mysterious encounter with a woman in a red coat the night before Ashley is found. Scott is shaken, convinced Ashley was trying to tell him something, and begins to dig into the weeks leading up to her death, as well as the bizarre world her father created and lived in, investigating whether there was more to the story than meets the eye.

The novel starts off in a manner that reminded me a bit of The Girl with the Dragon Tattoo (only better because I actually *like* McGrath, unlike stupid Mikael. But I digress):  A disgraced writer, a mysterious death, a world of intrigue. But Pessl creates her own world of characters and brilliantly weaves in several different types of media: newspaper, websites, photographs, testimonials, etc. to help tell the story. I loved this approach because it pulls the reader right in and there were times I forgot that I was reading about fictional characters.

Pessl also works in several storylines, yet it never felt cluttered to me. We learn about Stanislas Cordova’s rise to fame and ventures into the dark and disturbing films he became famous for (the titular night films).  We learn bits and pieces about Ashley’s early life and rumors of cults and satanic practices at the Cordova estate. There’s Scott’s story, two more main characters, Nora and Hopper, and some witchcraft, a rehabilitation center “jailbreak” and many other small bizarre events that add up to a strange and disjointed bigger picture.  The devil is in the details (here, it can be taken literally) and Pessl has a vivid imagination that translates beautifully onto the page. There is one scene involving a secret nightclub that was surreal and sinister and I imagine would look absolutely amazing on the big screen.

In the hands of someone else, this could have been sloppy or overly dramatic, but she weaves in just the right amount of skepticism and doubt, keeping her characters grounded, and leaving the element of mystery about so much of the book’s events. Was Ashley’s death natural or was there something more sinister involved? Is McGrath imagining things? What really happened on the Cordova estate? It’s a wonderful read and the ending satisfies as well – I think the reader can draw his or her own conclusions or choose to leave it a mystery; she gives us the story and leaves the verdict up to us.

If you are a fan of mystery, I highly recommend this book, I think there is something in there for everyone and I will definitely be looking for more of Ms. Pessl’s work.