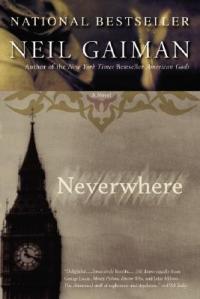 Guys, I really wanted to do this review justice, but I read it back in August. IN AUGUST. And I am now twelve, count ’em, TWELVE reviews behind as of right now, and the only reason that number isn’t bigger is because I’ve been reading a lot of books I’m either too ashamed to review, or that just aren’t worth reviewing because I don’t have that much to say.

Point is, this book deserves better than it’s going to get from me, because I really liked it. But I’m tired and overwhelmed and I have writer’s block and what am I doing with my life anyway?

Scratch it. This might be exactly the mood I need to be in to write this review, because what the hell was Richard Mayhew doing with his life before he fell into the London Underground? Nothing, that’s what. He was a pushover with a horrible girlfriend, and he had a horrible job (he kept trolls on his computer. Trolls!), both of which he’d somehow convinced himself he liked, even loved. And yeah maybe his life was safe and comfortable, but it was also boring and pointless as fuck.

And then he became an unperson, and he was still useless and boring (and a bit confused), until he wasn’t. Until he was dragged on a bloody and violent quest for strange, terrifying people he barely knew, through Gaiman’s own version of Wonderland. He wanted his safe life back, to be comfortable and contained, until he got his wish and realized it was the stupidest wish he’d ever wished, and decided to go on an adventure instead. It’s amazing how much I like this idea so much better now than I did two months ago when I finished the book, but I suppose that’s why you re-read things, yes? Because they mean different things to you at different points in your life.

That’s not to say that this book is perfect, because it isn’t, and like I said in my initial review, it’s very obvious this is his first solo novel. (Anansi Boys and Stardust are still my favorites of his.) It’s not as polished as his later works. But dammit, I still thought it was great.

Also, I thought Door was brilliant, and the bad guy(s) were terrifying.

I have never read what I suppose is classified as Urban Fantasy and Neverwhere was a great introduction to it. I wouldn’t have picked up the book if not for the BBC4 radio version last year. I listened to the episodes before bed each night but missed the finale. Interested to see how the story ended I picked it up from the library. 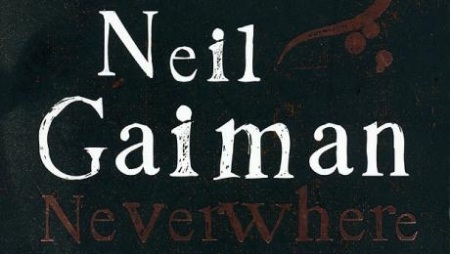 Not unlike with Terry Pratchett, his Good Omens co-writer, Neil Gaiman is an author whose work I’m not as familiar with as I would like to think. I remember being introduced to his writing way back in high school, a friend of mine letting me borrow her copy of Fragile Things. Years later, though, and his prose regrettably remained a bit of an unknown commodity, me having read only The Graveyard Book, volumes one through three of The Sandman, The Day I Swapped My Dad for Two Goldfish, and the aforementioned Good Omens in the interim.

Why, then, do I feel as if I know him well enough to consider him a personal favorite? I guess it’s primarily due to his dealings in both television and film. There’s Stardust, one of the first movies I saw in theaters without my family tagging along; MirrorMask, the glorious net result of combining Gaiman and McKean, a duo equalled only by that of Gaiman and Pratchett; Coraline, which proved that Tim Burton didn’t have a monopoly on stop-motion for children that’s of the darker variety; and, last but not least, “The Doctor’s Wife,” his first go atDoctor Who which has been met with nearly universal praise. He’s no Stephen King, but he gets around.

Now, you might notice I failed to mention the example most relevant to this review, the television adaptation of Nevewhere. That was not unintentional, as it was that same series that gave me cause for concern about the novel upon which it was based. Though I was taken rather immediately by the idea behind it, the show never seemed to take that idea and run with it like I was hoping, as well as expecting. What I got was a show that was watchable, and little more. But, as with so many books before it, I couldn’t resist Neverwhere’s allure when I discovered the book on a thrift store shelf. Who was I to think that Gaiman, whose last name it took me years to realize did, in fact, sound like “gay man” when pronounced properly, would let me down, especially with a book held in such high regard?

Apparently, someone who knew what he was talking about, becauseNeverwhere is a story in dire need of a touch-up. The writing itself is more or less up to Gaiman’s usual standards, but a close inspection of the plot reveals uncharacteristic flaws which increase in number as he moves towards the conclusion, the convolutions of the plot exposed when it comes time for the big reveal. I got the sense that he was aiming to shock his readers with revelation upon revelation, trying to keep the reader’s guessing, yet he only succeeded in making me second-guessing him, each of the twists feeling much like conjured up nonsense.

Meanwhile, he saved the worst for last, teasing readers with a virtual non-ending, again intended to take the readers by surprise, before reneging on it completely in the waning moments and going ahead with the ending I expected from the jump, the one anyone could’ve predicted from the moment Door first showed up in Richard’s line-of-sight, tired and bloody. Though I don’t mind that he went the typical route so much as I’m bothered by the fact that he wasted his readers’ time by first lolly-gagging around and delaying the inevitable.

The wonder of his writing, however, is that it can smooth over even the most patch-work of plots, meaning I could never stay mad at him for long, and that the book, as a whole, was at least what little I paid for it. In short, if Gaiman’s style of prose appeals to you, then Neverwhere should make for a decent read, no matter its many imperfections.

This review is for the audiobook version of Neverwhere, read by Neil Gaiman.  Neverwhere is one of my favorite novels.  The sheer inventiveness of it makes my brain fizz over with happiness.

Richard Mayhew, a Scot living in London, helps an injured girl named Door and is drawn into the world of London Below, a city that exists in the mystical margins of London Above, peopled by the people who fell between the cracks.  Like Alice in Lewis Carroll’s books, Richard is forced to face a series of impossible events that he is barely able to cope with.  Door’s entire family has been slaughtered and she is being stalked by Croup and Vandermar, supernatural assassins (and seriously among the best villains ever created).  She needs to find out who is after her and why before Croup and Vandermar can finish her off.  For anyone who has ever looked at a London Tube map and marveled at the names, Neverwhere is a particular delight as Neil Gaiman’s vivid imagination turns various tube stop names into real things.  We have an Angel named Islington, an Earl’s Court (a medieval court housed in a train carriage that travels the Underground, presided over by an Earl), actual black friars.  These delights only scratch the surface of all the delightful improbabilities of London Below.  It’s not a place I’d want to live but it is an amazing place to visit.

I already loved the book before downloading this audiobook version but hearing Neil Gaiman read it made me fall in love with it over again.  Who knew that Gaiman was such a good reader?  He does a great Scottish accent for his hero Richard Mayhew and gives marvelous life to his delicious villains Croup and Vandermar.  I highly, highly recommend checking the audiobook out.