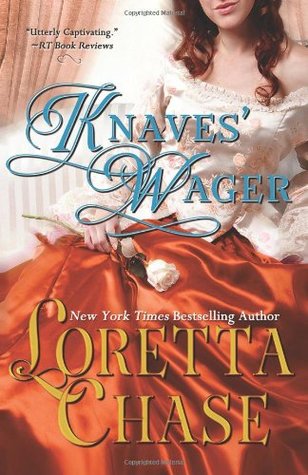 Thanks to Mrs. Julien for her awesome romance review template!

Knaves’ Wager is a romance of the you are everything I never knew I always wanted AND opposites attract variety: Boy meets girl. He is the reprobate former best friend of her now-dead husband. She hates him because she believes he drove her husband to his early death, and is left owing him crippling gambling debts. He agrees to a foolish wager to seduce her against all odds. Boy and girl move forward together secure in their love and commitment.

A historical romance set in the Regency era just around the end of the Napoleonic wars and written by Loretta Chase, Knaves’ Wager is my fourteenth book by this author. I generally find her work at least enjoyable, and at its best, spectacular and infinitely re-readable. Chase is, most famously, the author of Lord of Scoundrels, the book All About Romance’s readers have voted as the number one in their top 100 for more than a decade. Personally, I prefer The Last Hellion, but what do I know? I found Knaves’ Wager, one of her early romances diverting, enjoyable and romantic.

The rest of this review, can be found on my blog.

Nathaniel Stokes became the Earl of Westfall when his cousin fell out of a boat in the Lake District and drowned. Before he was an earl, he was plain Nate Stokes, one of Wellington’s most trusted spies, and he still can’t seem to settle down and be a staid aristocrat. So no one will look to closely at him, or ponder why he was absent for so much of the war on the Peninsula, he cultivates a clumsy and bookish persona, wears fake spectacles and walks with a limp. He likes finding lost and stolen trinkets and artworks for his fellow peers, and is intrigued when the Marquis of Ebberling comes to him to find a governess that fled his home three years ago, who stole from him, and may have killed his wife. He’s offering an obscene amount of money to get the job done quickly, and Nate likes the challenge of finding someone who disappeared without a trace so long ago.

Emily Portsman, as the girl is now known, found refuge at the scandalous Tantalus Club, a gambling establishment staffed entirely by well-born and educated young ladies,  run by Lady Haybury, the heroine of A Beginner’s Guide to Rakes (and the first book in this series). She’s not left the club for three years, for fear of Ebberling finding her. Twice a week, she has to dye her hair brown, and while she invites the occasional gentleman up to her rooms, she tries to stay unnoticed as much as possible. So when she overhears Nate at lunch, talking to his younger brother about locating a thief among the staff at the club, all her paranoia returns in full. Believing him to be a befuddled scholar, she invites him to her room to seduce his mission out of him, not realizing that she’s playing straight into Nate’s hands. As the two become closer, Nate becomes more and more convinced that Ebberling left several key points out of his tale, and that Emily is not the ruthless murderer he’s been sent to find, at all. But how can they prove her innocence, against the word of a rich and powerful peer of the realm?

The rest of my review, and a shout-out to Mrs. Julien, can be found on my blog.