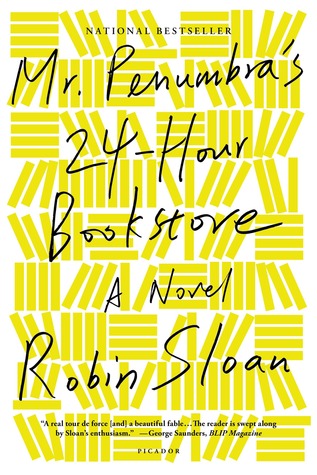 Having lost his job as a web developer due to the recession, Clay Jannon finds a new job as the night clerk in the titular bookstore, belonging to the mysterious Mr. Penumbra. Not that he sells all that many books. As well as the normal shelves, with its somewhat eclectic selection of novels and non fiction, there is what Clay calls the “wayback” section of the store, huge shelves of unique volumes, not to be found in any search engine, a sort of strange lending library for the odd individuals who show up with a laminated cards, returning a volume and fetching another at random intervals. Clay is asked to keep a log, describing the appearance of each of the customers and the state of mind each new customer was in when they come to swap a book.

Clay starts using his web developer skills to make a 3D-model of the store and the “wayback” section on his computer, trying to see if there’s any pattern, rhyme or reason to the strange regulars and their lending patterns. He also works on trying to lure new customers to the store, using all the tools available to him in social media to advertise its location. Once he meets Kat, a young lady working at Google, his plans to map the mysterious patterns of Mr. Penumbra’s store really take off, and soon he and his friends are involved in a mysterious quest involving a global conspiracy, a secret organisation, code breaking, data visualisation on a massive scale and possibly the secret to eternal life.

I apologize in advance for this mess of a non-review.

You guys, I read this a few weeks ago (really, less than a month ago), and already I can’t remember what I want to say about it. I remember that I thought it was OK. Anything else?

I remember wanting to like it more than I did. Everyone else seemed to. I remember not really caring about any of the main characters all that much, and wishing that I did. I remember wanting to know more about the mystery and the secret society, and less about Google and the Clay & Kat (the fact that I just had to use Google to remind myself of the characters’ names seems a bit ironic, I suppose). I wanted more about Neel and how he made his fortune, and more about the fantasy series of books that Neel and Clay loved growing up.

For those who haven’t yet read it, Mr. Penumbra’s 24-Hour Bookstore is a mysterious place, unlike other bookstores. Young Clay, recently laid off from his graphic designer job, goes to work there as a clerk, and finds that the store is the facade for an entirely different world. Clay and his friends try to unravel the mystery behind the store’s existence, and we learn a whole lot about book making, fonts, and Google.

Does Google really have special meals filled with specific vitamins for its staff? I can’t imagine that it does, but I thought I’d ask.

Honestly, I don’t think I’ve ever written such a disjointed and wandering review before, but I can barely remember anything about this book. Sorry.

You can read more of my reviews (of books that I can actually remember) on my blog.

There are two questions I usually ask myself as I’m preparing to rate and/or review a book:

1) Did this book accomplish what it set out to accomplish?
2) How much did I love it?

Depending on the answers to those two questions, this is why I can give four stars to a book by an author who maybe necessarily isn’t the best writer or maybe doesn’t write in a ‘respectable’ genre, or engage ‘important ideas’ in his or her writing, but I only give three (or even two) stars to that guy over there who is way smarter, has a better handle on how to write prose, and is busy engaging with some pretty heavy themes. For me, a four star book maybe has some issues, or maybe I just don’t LOVE it, but it knew what it wanted and went for it. Mr Three Star, though, he had all these ideas and it came out a jumbled mess.

In particular, I’m thinking of reading Mr. Penumbra’s 24-Hour Bookstore (a book that I really enjoyed, even if it had some serious pacing and characterization issues) followed immediately by You by Austin Grossman (a book I very much expected to love, but didn’t, and that’s a story I’ll save for review #50). Grossman is undoubtedly the better writer. His prose is evocative, the under the surface stuff in that novel is beautiful in parts, but overall that book was a mess. Point: Mr. Penumbra.

I’m taking an awful long time justifying my feelings about this book without actually talking about it, but this was stuff I’d been thinking about the whole time I was reading. Most people I know who have read this book haven’t enjoyed it very much, and it’s interesting to me to think about why I did enjoy it, despite its flaws.

Clay Jannon is a newly unemployed graphic designer. He passes Mr. Penumbra’s 24-Hour bookstore and happens to see a Help Wanted sign in the window. Before he knows it, he’s the bookstore’s new night clerk. But this is a very strange bookstore. Most of its contents are strange leatherbound books with weird one word titles, and these books are never bought, only borrowed, and by very strange, often harrowed looking, customers. Clay can’t resist the mystery of it all, and soon he’s uncovering a bunch of stuff he probably shouldn’t, involving codes, ancient texts, conspiracies, secret societies, and a beautiful girl who works for Google.

It was a fast, fun read, and while there was a bit at the end that felt like it was trying a little too hard for a meaningful ending, for the most part this is actually a no bones about it thriller, just with books and nerds instead of guns and spies. It’s actually more Da Vinci Code than it is Ready Player One. Sloan does a nice job mixing the two worlds of technology and print, the old and the new, even if his characters are only empty cyphers used mostly for plot movement, and even if he rushes through a lot of stuff that I wish he had spent more time on.

Recommended if you are a bibliophile and you like mystery books with codes and secret societies. Fun, but not a favorite.