Having revisited the movie earlier in the year, because I can never pass up a free screening, the next logical step seemed to be reading the book that inspired it. I say inspired due to the long list of changes that were made in the process of adapting it for the silver screen. Scenes were cut, characters were rewritten, made to swap places, and their fates changed, among other things. What Crichton, who worked on the script with David Koepp, did was make it more family friendly and feel-good. That and he tried to strip out some of the more impractical to film scenes, ones which, it so happens, were some of my favorites. He robbed us, to give an example, of seeing my personal favorite, the pterodactyl, in flight and in action. END_OF_DOCUMENT_TOKEN_TO_BE_REPLACED 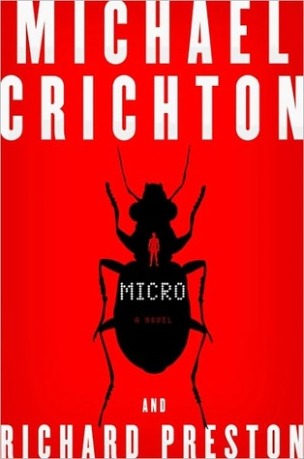 Ah, the ultimate plane book. 450 pages and I read it in about three hours. That is not meant to insult Crichton (who wrote about 1/3 of Micro before his death) or Preston (who finished it off) in any way. This was a fun, fast thriller and just made me miss Crichton even more than I already did.
The basic premise: seven grad students with varying specialities (beetles, medicine made from plants, bioweapons made from bugs, etc) go to Hawaii for a job interview with a nanotechnology company. One the students’ brother was VP of the company, but died under mysterious circumstances the night before their trip. Said student investigates, confronts the evil CEO (he was big bad fun) and yeah, the students all get shrunk to 1/2 an inch tall and dumped in the jungles of Hawaii.
The book was fun though! Lots of dangerous, cool information on insects and random flashbacks to Honey, I Shrunk the Kids. I found myself very entertained, and will probably forget I ever read it in about a year. Still, good times, and a solid recommendation for a vacation read.

I loved this book. I mean, it’s Jurassic Park…that means dinosaurs! And Dr. Ian Malcolm! And more dinosaurs! And chaos theory! And I mean…come  on…it’s Jurassic Park! To be honest I don’t know what took me so long to read it. The movie’s a classic. I’ve been a fan of Michael Crichton ever since reading The Andromeda Strain. I think I was afraid of being disappointed, thankfully, Crichton delivers.

John Hammond is a business man who comes up with a billion dollar idea. Using dinosaur DNA extracted from blood-sucking insects encased in amber, he resurrects dinosaurs from extinction using the best scientists from across the United States. His intention is to create hugely profitable chain of dinosaur theme parks across the globe. The book begins a year before Jurassic Park is set to open, Hammond has gathered together his team to inspect the park and offer their seal of approval. Chief paleontologist, Dr. Alan Grant, and paleobotanist, Dr. Ellie Sattler, have been kept in the dark about Hammond’s intentions for their research. Dr. Ian Malcolm, an expert in chaos theory, has warned Hammond that his plans will fail due to the amount of unpredictable variables. Dennis Nedry is Hammond’s computer programmer, in charge of the mechanical workings of the entire park. Donald Gennaro Hammond’s grandchildren, Lex and Tim, have been invited to the park as it’s first visitors. Hammond’s team is rounded out with an assortment of scientists, engineers, and wildlife specialists. This inspection begins to fall into chaos when Nedry betrays Hammond, stealing dinosaur embryos to give to one of Hammond’s competitors. To complete this heist, Nedry shuts down the park’s safety systems, however, he gets lost on his way to the drop-off point. With no one available to restart the safety systems, the park soon falls into chaos.