I’m not usually the kind of girl that picks up a lot of books about zombies, yet I have been surprised and delighted by the choices lately. First I read, Warm Bodies by Isaac Marion and then I found World War Z (2007) by Max Brooks. Sure, these two weren’t too hard to miss–when a post a day was popping up on Cannonball and the Hollywood advertising machines were grinding away. But both were so unique and enjoyable in their own way, I almost feel like I’ve become a fan of the genre.

World War Z takes place directly after a 10-year war with zombies that began sometime in the near future. The world is recognizable and familiar as the one we live in now. The story is told through many short stories of the survivors. Their experiences are all harrowing but vary drastically. Because the zombie apocalypse is a world-wide problem, Brooks allows his book to have an international focus. The story starts in China, one of the solutions to the crisis has its origins in South Africa, and even though the United States plays an important role throughout the book, some countries that you wouldn’t expect are highlighted. 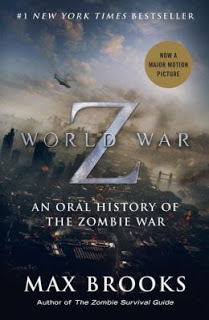 “Mr. Brooks’ talents as a writer are as proficient as his father’s talent for comedy; and make no mistake about it, his father has plenty of reasons to be proud of his work!”

Max Brooks’ World War Z is a collection of stories as told by Zombie war survivors. Soldiers, politicians, refugees from around the world present us with pieces of an apocalyptic puzzle, one that brought mankind to the edge of extinction. Their accounts are vivid, horrifying, often bitter, bleak and demoralizing. Faced with an almost unstoppable force that feels no emotion, humans will do anything to survive.

There has been a lot of praise for Brooks’ book, and, already after reading the first page, I could see why. He has crafted a detailed, realistic scenario of what would happen if there was a zombie outbreak. You can tell he’s given this a lot of thought: he explores everything from how to effectively destroy zombies to how different countries would react, to how some zombies would float to the surface as opposed to walking the bottom of the sea depending on how bloated they are. It’s a rich world – which was kind of the only drawback of this book for me.

Having read World War Z right after Robopocalypse I couldn’t help but make comparisons. The two are similar in some ways, not least in how film-friendly their subject matter (and even their approach) is. Both are told through several narrators. This works much better in the case of World War Z, perhaps because the reason there are several narrators (there is a journalist collecting the stories) is much more plausible than in that of Robopocalypse. The journalist keeps mainly in the background, speaking up only to ask questions or to introduce the setting. He’s discreet and doesn’t get in the way of the story – which is way more complicated and nuanced than in Robopocalypse.

Still, the fact that there are so many narrators is, I feel, detrimental. While the story never really became repetitive, it did tend to drag on a bit. Some narrators’ stories were similar enough to be eligible for exclusion; some could have been left out as they didn’t seem to do anything to advance the plot. Maybe it is the format of having several sub-plots instead of a main plot that doesn’t suit me.

Although this book wasn’t perfect, I found it enjoyable and at times it had me at the edge of my seat. A must-read – at least for zombie enthusiasts.

My book reviews are written as a discussion of a book, and not as an advertisement.  Please be aware that there may be information that some would consider spoilers.  Continue on at your own risk!

A co-worker recommended this book last year.  After reading the sample I decided to hold off on reading World War Z because it felt too much like Robopocalypse (which I really enjoyed.)  Now that the movie is coming out, I really prefer to read the book before I see the movie (even though I hear the movie has gone a separate way).  It’s rare that a book is better than the movie, although sometimes both are excellent (Shawshank Redemption- I’m thinking of you!)  How does this soon to be movie adaptation fare?  Here is what I thought….

Presumably I’m one of only about 3 people on the planet who hasn’t read Brooks’ astonishing novel. The upcoming film has nothing but negative buzz about it, so do yourself a favour. Skip it and (re-) read the book. It’s awesome

I’ve been reading at fine pace, but reviewing quite leisurely. Here are two that I’ve had on the docket for awhile:

I stuck them both in 4 stars, but I’d lean closer to 3 for World War Z. They were both great reads, and I recommend them highly. Click above to read the full reviews.