I’ve been hesitant to read this one because I didn’t enjoy Shanghai Girls, the novel that preceded this one, that much (what is the good term for that? I feel like that prequel is inaccurate because to me a prequel is something that takes place previously but was written/filmed afterwards … I would never call the first part of Harry Potter a prequel to Part II though I have seen the word prequel used in that kind of context; I just think it’s incorrect). Shanghai Girls started off well enough, but by the end of the novel, it just felt too much like a rehashing of any other novel about the difficulties of being an Asian immigrant to the United States. I don’t think I would have been quite as disappointed if the novel hadn’t started off strong, and if I hadn’t had such high expectations due to Lisa See’s previous novels. I also think I was getting irritated with the main character who did tend to focus on the negative in life and the things she didn’t have (so it was nice when her sister called her out on that).
Having said that, I enjoyed Dreams of Joy more than I did Shanghai Girls. I’m not sure if that is due to lowered expectations, or if it is because she dealt with a topic that I’m familiar with in passing, but haven’t read too much about in fiction or otherwise. At the end of Shanghai Girls, Joy finds out the truth about her parents, and decides to run away to Communist China (this novel takes place in the ’50s). The chapters alternate between Joy as she sees Mao’s China, and Pearl as she follows her daughter to save her. Joy’s parents have always warned her against the Communist regime of China, but in college, she joined a student group that discussed the positives of Communism and the community it creates. As a result, 19 year old and idealistic Joy is an extremely annoying and naive character for the first half of her chapters, always seeing the positive, ignoring the bad despite the half clues her birth father, Z.G. Lin occasionally gives her.
Full Review. 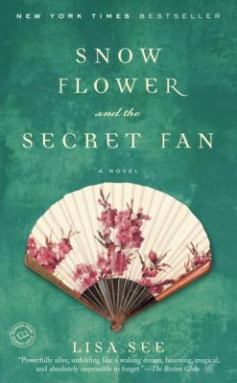 Lisa See’s Snow Flower and the Secret Fan is my book club’s July selection, but it’s been on my to-read shelf for some time now, so I’d have gotten around to it eventually no matter what. I know that in previous reviews I’ve mentioned (probably excessively so) my love for British period pieces. You should also know that I am quite fond of Asian period pieces. It’s not that I lack any interest in modern-day China or Japan or any of the other nations of the Far East, I just love thinking about the past. How did people live? What did they eat? What did they wear? How did women fare? Yes this novel is fiction, but my experience with See’s writing indicates she does quite a bit of research out of respect for her Chinese heritage, so I was eager to delve into another of See’s novels.

Snow Flower is the story of Lily and Snow Flower, two young women in mid-19th century China. China at this time is a place where daughters are not valued, at least not as anything aside from possessions and unpaid servants in their own homes. Lily is the third of four children in a lower middle class farming family. She never really feels her mother’s love and this deprivation will turn out to be her entire life’s goal – to seek out someone whom she can truly love and who will love her back. Around the age of six, a local fortune teller is brought to her home to help decide the best time to bind Lily’s feet; it’s during this reading that he notices Lily’s beautiful feet and decides to enlist the assistance of Madame Wang, a renowned matchmaker from the nearby town Tongkuo. Wang sees potential for a match between Lily and another young girl from Tongkuo – they will be laotong, or “old sames.” The bond between two women considered laotong is deeper than that between husband and wife and Lily is incredibly excited to have such an honor.

Lily first meets Snow Flower when they are both seven, and she feels an instant desire to make this new girl love her like no one ever has. She feels like Snow Flower comes from a much more highly-regarded family but vows to work extra hard to overcome any flaws Snow Flower may see in this. The two girls become fast friends and communicate on a fan using nu shu, a secret language women of the time used to write without interference from men.

The novel begins as Lily is 80 and looking back on her long life, and what we get isn’t necessarily anything all that new in the realm of Asian-themed literature, as far as my experience goes. I really liked the book despite it not being all that ground-breaking. I’d say that the first thing I appreciated in this novel is the background and details See includes about day-to-day life during the 1800s in China. I’ve never studied China outside of reading books like this or watching martial arts movies, so my knowledge of the culture could fill a thimble. The explanations of the rituals, family customs, dress, and gender roles were fascinating. Women were raised to be married out to an acceptable man, at which point they’d spend at most three years still living with their ‘natal’ family and making conjugal visits to their husband’s home. They had to bring their own food, so that they wouldn’t drain their new family’s resources unnecessarily! Once the three years after the marriage is up, or the woman gets pregnant, she makes the permanent move into her husband’s home, where she is ranked low on the totem pole and must kowtow to the needs of an often hyper-critical mother-in-law. Why were they like this? Because it’s tradition. The depth to which Chinese culture was steeped in tradition is amazing in this novel.

END_OF_DOCUMENT_TOKEN_TO_BE_REPLACED 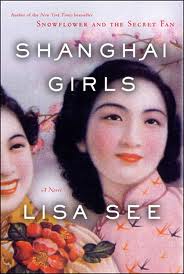 Pearl and May are two sisters living in Shanghai in the 1930’s.  After their father loses his fortune, they are sold to a Chinese businessman living in Los Angeles as brides for two of his sons.  Leaving Shanghai just ahead of the Japanese invasion, Shanghai Girls is the story of their survival during their journey to the US and redefining their lives as Chinese immigrants in the new world.

Frankly, I found this novel a bit meh.  What kept me going were the historical details.  I had no idea that Shanghai was a partitioned city pre WWII, with Chinese citizens being excluded from certain areas controlled by European interests.  The extreme racism and mistreatment the Chinese immigrants faced in America was horrific, even after China became a wartime ally against the Japanese.  And with the rise of Communism in China after the war, American Chinese were treated with more hostility and suspicion than ever.

I found the subject to be an interesting one, but would not recommend this novel.  The “twists” were telegraphed from a mile off and the characters were simply not that engaging.  I do have a personal preference for history to be consumed in conjunction with a fictionalized story, but I plan to search out the non-fiction version to satisfy my curiosity here.

Anyways, I read what Lisa See wrote about Snow Flower and the Secret Fan before I sat down to write my reflections on this novel and I’m finding her commentary colouring my impressions so deeply I might as well quote her, keep my words few, and be done with it!  I deeply I connected and identified with this book and See describes how this could be true for a North American reader in 2012 reading this novel set in 19th century China: “on the surface, we as American women are independent, free, and mobile, but at our cores we still long for love, friendship, happiness, tranquility, and to be heard.”