Picture the scene. I’m on my summer sunshine holiday, charging through books as I sunbathe and glug beer (check out my multi-tasking), when my Kindle dies. Thank god I’m at my Grandpa’s villa, and my Grandpa has a bit of a trashy thriller habit. THANK GOD. I’m not averse to a bit of Jack Reacher, so this fall-back position wasn’t too bad.

The book opens in Nebraska. There is one unreliable eye-witness to a bloody murder, and Special Agent Julia Sorenson from the FBI’s Omaha field office is sent to investigate. Meanwhile Reacher, en route to Virginia to meet the woman-on-the-end-of-the-phone from 61 Hours, is picked up hitchhiking on the interstate. The group that picks him up has a strange dynamic, and it’s not long before Reacher realises something is up. And boy is it. We’ve got a missing cocktail waitress, undercover FBI agents, mysterious Middle-Eastern connections, and Reacher has a broken nose. Excellent.

A Wanted Man is the seventeenth Jack Reacher novel, the fourth one I’ve read, and I must say, Lee Child doesn’t let you down. The prose is skilfully simple; the plot is sufficiently complicated to keep you interested, but not so much that it feels contrived; the characters are well-drawn enough that you care about them; and Jack continues to be preposterously charismatic, in his ‘rough edges’ kind of way. Child is as mad about him as ever, one glowing paragraph describes him as:

‘A wild man. But not really. Underneath everything else he seemed strangely civilised. He had moved with a kind of considered grace, calm and contained. He had spoken the same way, thinking ahead… Straight to the heart of the matter. Knowledgeable, and confident. His gaze was both wise and appealing, both friendly and bleak, both frank and utterly cynical.’

I suppose Child feels the same as all of us, we’d like to either be Reacher or go for a beer with him. Hanging out with him while he fascinated yet more women and foiled another set of bad guys was good fun. 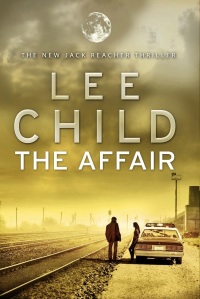 I read quite a lot. In fact, I fancy myself as a bit of a ‘reader’. I’m also a hell of a snob, and get mortally offended by bad writing. Bad writing pains me, but being a snob is also exhausting. Which is why it’s always a relief to come up against a novelist who is completely disposable, without intellectual pretensions, bloody good fun, but still a good writer. Lee Child is that rare beast. His Jack Reacher books won’t be troubling the Booker panel any time soon, but boy are they a good holiday read. So, picture the scene. There I am, on holiday in Malta, on the sun-lounger with a beer in one hand and Jack Reacher in the other. Excellent.

The Affair takes you back to the start, for this one Reacher’s in uniform. It’s six months before the events of Killing Floor, and Jack has yet to become the Littlest Hobo of later books. He’s still an MP, but right from the off you know this state of affairs isn’t going to last long. Reacher has been sent to deepest darkest small-town Mississippi. He’s undercover, operating as the unofficial investigator into the murder of the girlfriend of a soldier posted on the nearby army base. This all sounds simple enough, until other similar murders, racial tension, clashes with rednecks, the outrageously hot local sheriff and an apparent military cover-up that goes all the way to the top are thrown into the mix.

It’s interesting to meet Reacher before he became the itinerant loner we all know and love. He was quite good at his job back when he had one, and was a slightly different kind of guy when he had orders to follow. There’s the usual short-lived love affair (and this time the earth really does move), a convoluted plot where most things are not as they seem, and some scenes in a diner where Reacher eats some really tasty burgers.  As well as the investigation, the book also shows us Reacher wrestling with his conscience as he weighs up the duty he owes to the uniform he wears against his own sense of right and wrong. You can probably guess which wins out.