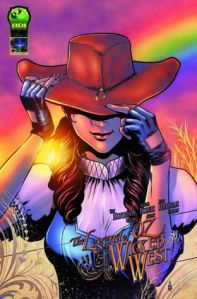 Target: Tom Hutchison’s The Legend of Oz: The Wicked West Volumes 1 and 2.  Art by Alisson Borges and Kate Finnegan.  Collecting the original miniseries and Issues #1-5

The Legend of Oz: The Wicked West is a truly stunning graphic novel.  Pitched as a reimagining of the L. Frank Baum masterpiece in a ‘Wild West’ setting, The Wicked West manages the difficult task of remaining true to its roots while exploring new territory.  But what stands out is the strength of the characters.  Both fresh and familiar, these new iterations of the much beloved Dorothy, Scarecrow, Tin Man and Lion are the driving force behind a story that is incredibly dynamic and compelling. 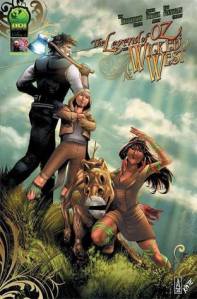 The Wicket West opens with Dorothy, who goes by her last name in this adaptation, making her way towards the Emerald City.  It has been three years since a twister pulled her and her horse, Toto, from their Kansas home and dropped them on the Wicked Witch of the East.  The Munchkins gave Gale the witch’s ruby spurs and gem-encrusted pistols as a reward and she’s been on the yellow-brick road ever since.  But the road has been pulled up by bandits and Gale has been lost for years.  Being lost has kept her off the radar for a while, but when she stumbles into a saloon filled with flying monkeys, the hunt is on again.