I wish I was a better writer, because I would love to write a proper letter of adoration to Mindy and this book. As it is, I’m not really that great a writer so I’ll just talk about some of the reasons I loved this book.

I’ve been a fan on Mindy’s since The Office. I know, just like everyone else. But I appreciate her humor and her work that she’s done on TV and in the writer’s room. I love her anecdotes, her voice, and her self-deprecation. I think that The Mindy Project is fantastic, and has surpassed New Girl as my favorite Tuesday night comedy. (I also think that New Girl is not that great this season but that’s neither here nor there.)

As someone who was once a teenage girl, I identify with a lot of her childhood stories. But if you’re not a fan of her work and her humor, this book is not for you. It worked for me because I could hear her reading the book to me in my head and it was great. I spent a good deal of it laughing out loud to the irritation of my boyfriend, but overall I loved it and would recommend. 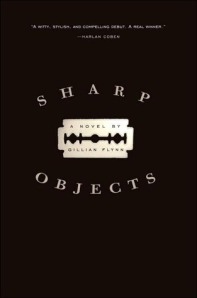 With a quote on the front reading, “keeps you reading with the force of a pure but nasty addiction,” I wasn’t sure what I was in for, but I knew it was going to be jacked up. I got a bit of a better picture when I peeked inside the cover, seeing, “I promise you will be thoroughly unnerved at the end.” Well, I just finished this book and I’m not even sure that I can write a coherent review but I want it out of my system, so here goes.

END_OF_DOCUMENT_TOKEN_TO_BE_REPLACED

I’m just really on a roll of books I don’t like.

Check out my review here. 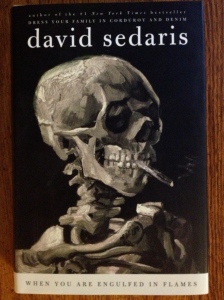 I somehow thought that including a picture I took myself of an actual book would be more powerful but I’m not feeling it.

I first got into David Sedaris about five years ago, when I made the mistake of reading Me Talk Pretty One Day on an airplane ride and spent the entire time trying to stifle giggles unsuccessfully. It’s shameful that it’s taken me so long to read When You Are Engulfed in Flames, but the result is no less pleasing.

Sedaris’ books are collections of stories that he writes about his life. More specifically his family, his longtime partner and their world travels, and the copious amounts of drugs he used in his younger years. I always find them ridiculous but relatable, and When You Are is no different. There are moments when I laugh so hard it hurts, and others when I feel sorry for him.

The last third(ish) of the book is about his decision to quit smoking and it’s both entertaining and informative. He describes to the reader that he started smoking in a culture that is so different than ours now. Now we have clean air zones, smoking bans, and the disintegration of the smoking section. As a non-smoker I never thought of the difference it would make to a traveler who can no longer smoke in their hotel, or having to smoke in those disgusting tanks they have in airports. Some people would say it serves them right, but whatever.

Overall it is just as enjoyable as Sedaris’ other books. I laugh out loud on every page and my boyfriend thinks I’m crazy. But at least I’m in the privacy of our home and not crying from laughter on a plane by myself. If you haven’t read any of his work, I would suggest starting with Holidays on Ice and moving up from there. 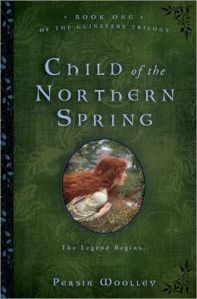 Let me start by saying that I never thought I would finish this book. That’s not to say that it is a bad book, in fact I found it both well written and interesting. It just seemed that so many things would come up when I tried to read and at 550+ pages it seemed daunting as the first book to undertake in CBR5. However, I finally finished this evening and am ready to talk about it.

I was drawn to this book  because the stories of Arthur, Guinevere, Merlin and the gang have always intrigued me, but I haven’t found an effective outlet for that curiosity. Most of the books I’ve tried have been too dry or dense and I end up tossing them to the side. As historical fiction, this obviously has a much lighter feel but I think probably gives an honest depiction of it’s central characters. That being said, I know nothing about the central characters other than random TV shows here and there, so I can’t judge how “legitimate” the story is. END_OF_DOCUMENT_TOKEN_TO_BE_REPLACED