At the end of January, I finished off The Fever series by Karen Marie Moning. As expected, Shadowfever picks up mere seconds after the end of Dreamfever (see my previous review) so I was waiting with bated breath for the book to arrive in the mail. Mac is still stuck in the other world, led by The Beast who has been protecting her in its own wild way. She assumes it was sent by Barrons, but in a swift turn of events she kills the creature and pushes him off a cliff. To her dismay, the Beast is revealed as someone very important in her life. Once again, Mac is alone and full of grief, shaking her fists at fate. Except this time around, she stops the moping and rises to the occasion. She becomes renewed with a sharp, cold vengeance. She vows to end this apocalyptic treasure hunt for the book and use its power to avenge the death of her loved ones.

This book clocks in at 671 pages, much longer than previous ones in the series. And oh boy was it wild ride where all the mysteries were revealed. We find out what happened to the Unseelie King, whether Mac is truly human, what the hell is Jericho Barrons and all importantly, who killed Mac’s sister, which started this got this whole crazy train a’rollin. I had to re-read the ending twice to comprehend all the ramifications of what took place. The reveal of the King was quite unexpected, but everything was in its right place in the end.

I would recommend this book series to paranormal romance fans in need of a new series to consume. I never actually read the first book and have no regrets.

Read this review and other waffle on my tumblr.

Goodreads summary: Dani “Mega” O’Malley plays by her own set of rules—and in a world overrun by Dark Fae, her biggest rule is: Do what it takes to survive. Possessing rare talents and the all-powerful Sword of Light, Dani is more than equipped for the task. In fact, she’s one of the rare humans who can defend themselves against the Unseelie. But now, amid the pandemonium, her greatest gifts have turned into serious liabilities.

Dani’s ex–best friend, MacKayla Lane, wants her dead, the terrifying Unseelie princes have put a price on her head, and Inspector Jayne, the head of the police force, is after her sword and will stop at nothing to get it. What’s more, people are being mysteriously frozen to death all over the city, encased on the spot in sub-zero, icy tableaux.

When Dublin’s most seductive nightclub gets blanketed in hoarfrost, Dani finds herself at the mercy of Ryodan, the club’s ruthless, immortal owner. He needs her quick wit and exceptional skill to figure out what’s freezing Fae and humans dead in their tracks—and Ryodan will do anything to ensure her compliance.

Dodging bullets, fangs, and fists, Dani must strike treacherous bargains and make desperate alliances to save her beloved Dublin—before everything and everyone in it gets iced.

I need to unpack a lot of conflicting feelings about this book. The first thing, off the top of my head, is that I’m definitely a Fever series fangirl, having absolutely devoured them for CBR4. Given that, I’m inclined to give any of these books the benefit of the doubt and then some. But there are just issues here that I can’t completely overlook, despite, again, finishing this in less than a day and being really engrossed in the proceedings.

For one — that summary up there? Sounds like a pretty normal, promising premise to a paranormal romance. Spunky heroine and rakish love interest are both introduced. Except here’s the thing: the spunky heroine, in this case, is 14 years old. Now, nothing happens happens in the book, but there are a lot of significant glances that are “misunderstood” by the young heroine, and some scenes where she is injured and is stripped to her underwear by one of the competing love interests (there are at least 3 that I can count) in order to heal her. Now, I’m not really a pearl-clutcher, generally speaking, nor am I the type to deny 14-year-olds their agency and burgeoning sexuality, but given the tone and content of the prior five books (hint: pretty fucking steamy) it squicks me just a little for the new protagonist to be jailbait. This isn’t exactly meant to be a YA series, and the prior books definitely weren’t. Furthermore, with regards to her agency, it would be one thing if she personally were displaying any kind of romantic notions toward anyone, but she’s not. Instead it’s like there are three guys kind of squabbling over her and her — oh god, I use this term all the time in pop culture criticism but again, I squick myself using it here because SHE’S FOURTEEN — magic vagina. I’m just going to stop there before Pedobear asks to take this review to his bunk.

Also, this sucker is 500+ pages, and honestly, I’d say it could be edited down by at about a third. I wouldn’t exactly say I was flat-out bored, clearly, given how quickly I went through the book; however, there are a lot of, frankly, really tedious scenes where Dani and Ryodan visit an “iced” site, wax Sherlockian about it, and then escape quickly without really learning anything new. I like mysteries and sleuthing stories to kind of drop some hints along the way, to build intrigue and build the case. In this instance, all of the sudden the knowledge-bomb is dropped right at the very end, and it’s not because of a lot of accumulated knowledge from the scenes — it’s because one character does some analysis he could have done at the beginning if he had only thought of it. In the prior five books, the paranormal mystery aspect of the plot was interspersed with the romantic element, and neither felt like they were dragging; here, since the romance has to be tempered because the romantic heroine is 14 years old, the mystery is put under more scrutiny and sometimes falls short.

Overall, since as I said I’m a fangirl, I probably won’t let these issues affect my enjoyment of the series too much, by which I mean, yes, I will unreservedly pick up the next installments and continue to fawn over the prior five. I will need KMM to tread carefully where the young protagonist is concerned, especially since two of her would-be suitors are older, and one considerably so (by which I mean immortal, but since jailbait rules don’t apply to inmortals, let’s say he’s probably meant to be about 30-ish in appearance.) So, in general, there was some definite weirdness afoot here that I wasn’t super satisfied with, but KMM did lay some good foundations for the upcoming novels. I’m categorizing this as 3 stars in wordpress since it’s part of Fever, but really, it’s probably a 2.5 as a standalone. 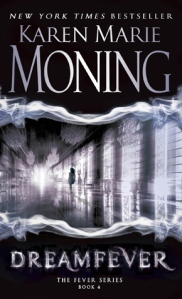 Ok let’s get this Cannonball 2013 going, shall we?

Dreamfever is the fourth book in the MacLayla Lane series from Karen Marie Moning.  Mac, our darling protagonist, is a sidhe-seer. This is a fancy celtic-y way of saying she can see the Fae (fairies!) in their true form. Over the course of four books, Mac discovers even more supernatural powers as she seeks revenge on those magical beings who killed her sister, Alina, in the first book.

At the beginning of this installment, Ms. Lane is certifiably down for the count. The walls between the Fae world and our reality have come down. All hell has literally broken loose, y’all. The big bad who likes to be called the Lord Master (how cliche’) has enslaved Mac with the help of 3 (or maybe 4) evil fairy princes. They obliterate her mind with sex and made her Pri-ya, a fate worst than death which has no cure.

Read the rest of the review on my blog.