Here’s a book about a 60 year old British divorced man.  I’m a 30 year old Canadian – a newlywed.  And my attention was kept throughout.  Something’s going on in The Sense of an Ending. 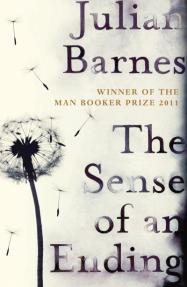 The Sense of an Ending is only a few hundred pages long, a quick read that often refuses to delve deeply into scene or description. Instead, the book relays information the same way it would actually be remembered years later: as a story the narrator has crafted about his own life, a hazy story, missing details, second-guessed and puzzled over. It is a fast read, but not a light one. The seemingly slight words on the pages are more than a little troubling, and I left the book with a strong sense of being unsettled, jostled out of my narrative assumptions. Life is a story we tell ourselves, but life itself is not a story. Read more on my blog. 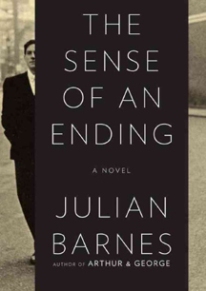 My first encounter with Julian Barnes was when I read A History of the World in 10½ Chapters on a vacation to Italy ten years ago. I was so taken by the beauty of the language and the clever way that Barnes wove common themes throughout the collection of stories that I thought the world had just found its newest Barnes disciple. Sadly, though I have read quite a few of his novels since then, none evoked the same response that I had to History. So I picked up The Sense of an Ending with a healthy dose of skepticism, Man Booker Prize be damned!

The Sense of an Ending is the story of Tony Webster, or rather, the story that Tony Webster remembers as he looks back at his early life and his re-evaluation of it in middle age. The novel is told in two parts. In Part One, Tony shares the story of his school days. He has three chums, and his little clique is intelligent, philosophical, and yes, arrogant in that intellectual-English-school-boy way.  When they go off to university they grow apart and Tony starts dating Veronica, whom he portrays as superior and condescending. After a bad breakup, Tony learns that Veronica has started dating his old friend Adrian. At first he pretends he isn’t bothered but later writes a scathing letter to the couple telling them exactly what he thinks of them. At the end of Part One, tragedy strikes, forever shattering the little group. Tony moves on with his life: his marriage, the birth of his child, and amiable divorce are covered in two and a half pages. In Part Two, something happens to cause Tony to re-think history, to dredge up past memories, contact Veronica, and try to figure out what exactly happened forty years ago.

Let me be clear: this is not a “he said/she said” novel. It’s more like “he said/he questioned what he said/he asked others what they thought he said.” The overriding theme of the novel is a twist on the “history is written by the winners” platitude: “History is the lies of the victors and the self-delusion of the defeated.” That second part often gets overlooked.

Curiously, in spite of all middle-aged Tony’s self-recriminations, I still liked him and, in fact, I felt like he was being way too hard on himself. Even the revelation of his vicious missive to Adrian and Veronica didn’t make me think less of him, and while the complexities of their relationship became more apparent, I still found Veronica to be superior and condescending and couldn’t muster much sympathy for her. I dare say other readers may have a different opinion, and that I think is the point. Every one of us has individual perspective and individual baggage that clouds our vision. Is there such a thing as complete objectivity? Even 60-year-old Tony can’t agree with 20-year-old Tony, so how can separate individuals with completely different backgrounds understand history the same way? So much of history, our own history, relies on our own imperfections of memory and our inability to truly understand someone or something outside ourselves.

With that understanding, I begin to wonder how my own tastes and preferences have changed as I have changed over time. Would I be as impressed with A History of the World in 10½ Chapters if I read it for the first time today? Would I like Barnes’s England, England more if the ten-year-older me read it now? One thing I learned from this novel is that we, like history, are seldom static. 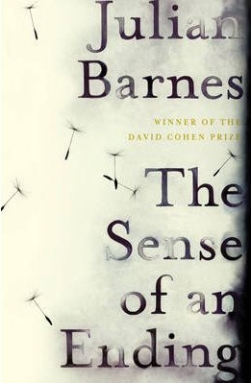 Pick up this book—it weighs little. At under 200 pages, I suppose novella would be an apt description, but crammed into its pages are endless glowing descriptions, painful moments, and tidbits of perfect clarity. The Sense of an Ending is riveting, cleverly meandering, and pretty damn good.

Told by a terribly unreliable narrator, Tony (or Anthony as his refined new friend Adrian calls him), from the later stages of his life, the story traces Tony’s days at secondary school to his golden years. He and his two best friends are a tight group, but a new student, Adrian, arrives and seamlessly melds into their crew. This group of four, prone to wearing their watches on the insides of their wrists and scoffing “That’s philosophically self-evident” in a half self-mocking, half desperate manner, finish their school year and head of in various directions. Three to university, one to his father’s business.

As time flows by and they drift apart, their lives carry on in mostly unremarkable ways. We stay with Tony through this section, only meeting up with the others during holiday reunions on breaks from school and within optimistically exchanged letters. Why Tony is telling this story becomes evident later. An emotionally devastating event, which Barnes carefully and tactfully leads the reader toward, shocks Tony and his friends and is the axis around which the story spins. This event and those deeply involved in it cause Tony to painfully reminisce and find something with which to anchor his current reality. His memory and observations serve him poorly, compelling him to dredge up past lovers and others.