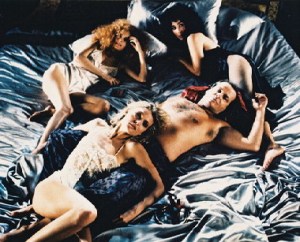 The film The Witches of Eastwick rocked my world when it came out. It was glossy, sexy and shallow. Jack Nicholson was still just the right side of fat, bald and sleazy, and the witches. The witches! I was in my early teens, and like with the Sex and the City girls 15 years later, I saw bits of what I wanted to be in all of them. I loved it. But if the film is the bright carapace, the book is the rotten guts. For all its undeniably polished prose, I really didn’t enjoy it.

Alexandra, Jane and Sukie are three divorcées, living in a small Rhode Island town. When we meet them, these witches have already turned their ex-husbands into keepsakes – Sukie’s is a placemat – and are having affairs with various of the town’s men. They revel in their powers, but are discontented, and struggle to make ends meet. Into this scene of seaside inertia comes Darryl Van Horne, a charismatic and mysterious stranger. A great bear of a man with hairy hands, he’s ‘pushy, coarse, a blabbermouth’ (some of the dialogue could have been written for Jack Nicholson). All three women become involved with him, and while he seems to encourage them to push themselves, they also find themselves neglecting other areas of their lives, and turning to vengeful magic when he rejects them.

The problem that I had with the book is that all the characters are just so horrible to each other. Horrible. I know that’s the point of most Updike novels, but it’s not much fun here. The gleefulness and impish sense of humour of the film is in book form spiteful and vicious. Bits of it are very funny, and it is of course very well written, although at times tiresome in its wordiness. A character can’t just cross the street and get in her car, there has to be two paragraphs devoted to it. I also got tired of the author’s sweeping pronouncements on what women want, and what motivates them. The vengeance element of the story, a major plot line that was left out of the film, is heavy-handed, and left me with a bad taste in my mouth. Which is pretty much how I felt about the whole book. Aside from the occasional short story, I hadn’t read much Updike before this. The Rabbit novels have been on my list for some time, but you know how that goes. I’ll get to them one of these days. I snagged a paperback copy of The Witches of Eastwick cheap at the used bookstore and decided to dive in.

What I liked most about the book is its oddball, imaginative plot. In Eastwick, a sleepy, seaside Rhode Island village, three close female friends, all divorced, spend their days in mostly mundane ways: gardening, walking the dog, gently neglecting their respective children. Thursday afternoons are reserved for drinking, snacking, and gossiping. Though Updike never truly details the extent of their witchy powers, it becomes evident that these three women are not quite normal (and later, it is revealed that any divorced Eastwick woman has similar powers). They mostly use their powers for silly things: conjuring a thunderstorm to clear an obnoxiously crowded beach, turning tennis balls into toads, or casting a spell on an annoying Eastwick woman so that whatever the witches toss into a ceramic jar falls out of her mouth (feathers, hatpins, dust bunnies, etc.).

Read more about this witchy tale over here.