F. Scott Fitzgerald was working on a novel about Hollywood, The Love of the Last Tycoon

, when he died, of a heart attack, at the age of 44. The novel was unfinished — although he had sketched out the plot, he had only completed sixteen of his planned thirty-one chapters. It was originally published in 1941, a year after the author’s death, as The Last Tycoon, compiled by Fitzgerald’s friend, the literary critic Edmund Wilson, but in 1993 Fitzgerald scholar Matthew J. Bruccoli edited and compiled what is now considered to be the authorized text, and reverted to what is believed to be Fitzgerald’s original desired title for the work, The Love of the Last Tycoon.

Fitzgerald moved to Hollywood in 1937, where he not only wrote short stories to earn income, but also started working on film projects. He made (uncredited) script adjustments to Gone with the Wind and Madame Curie. Estranged from his wife Zelda, who had been in and out of mental institutions since the early 1930s, Fitzgerald met and fell in love with gossip columnist Sheilah Graham and lived with her in Hollywood until his death. Fitzgerald was an alcoholic, and was in fragile health:

Fitzgerald suffered two heart attacks in the late 1930s. After the first, in Schwab’s Drug Store, he was ordered by his doctor to avoid strenuous exertion. He moved in with Sheilah Graham, who lived in Hollywood on North Hayworth Avenue, one block east of Fitzgerald’s apartment on North Laurel Avenue. Fitzgerald had two flights of stairs to climb to his apartment; Graham’s was on the ground floor. — Wikipedia

The hero of The Love of the Last Tycoon, Monroe Stahr, is a work-a-holic Hollywood producer, based on “Boy Wonder” Irving Thalberg, who Fitzgerald had worked with briefly and who also died young, at the age of 37. Like Fitzgerald and Thalberg, Stahr is in fragile health and has a doctor monitoring his heart on a regular basis. Stahr is a self-made man who has an innate understanding of how to get the best work out of people. His interest and influence touches all aspects of movie production, from choosing the appropriate director, to working with multiple screenwriters, to wrangling with union organizers. His whole life is work, until one night at the studio lot, after an earthquake, he catches sight of a young woman, Kathleen Moore, who reminds him of his dead wife. He is immediately smitten, and slowly starts to question how consumed he has allowed himself to become by his work.

Fitzgerald deftly sketches the 24-hour schedule of a studio boss, while also making him a thinking, feeling human being. The object of Stahr’s desire, Kathleen, is a little less clearly drawn, but that seems deliberate, as she presents herself at first as a woman of mystery, to discourage Stahr’s romantic pursuit. The story fluctuates between scenes involving Stahr in his daily life and the first-person observations of Cecilia Brady, the daughter of Stahr’s studio rival, Pat Brady, who was modeled on Louis B. Mayer. 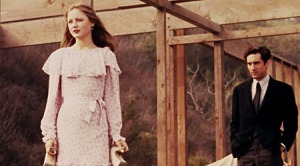 Director Elia Kazan made a movie version of the novel in 1976, starring Robert DeNiro in one of his most engaging performances as Monroe Stahr. It is ultimately a little unsatisfying, a little unfinished, like the novel, but it is enjoyable to watch, featuring some great actors like Jack Nicholson, Robert Mitchum and Theresa Russell in key roles. The best scene in the film is DeNiro acting out all of the parts in movie for an author (Donald Pleasence) who just can’t understand how to write for Hollywood.

Stahr and his work, not just his potential romance, are so involving that it is truly tragic for the reader when the text stops abruptly. The very copious notes included in the volume clearly tell the reader where Fitzgerald was intending to take the story, but it is still frustrating to not be able to finish the journey with his winning prose. One wonders if his intentions would have played out as neatly as his notes suggest as Fitzgerald was known for re-writing and re-working.

Perhaps the most amazing thing about The Love of the Last Tycoon is that even in its truncated state it is still a wonderful novel. Monroe Stahr is an unforgettable character. And Fitzgerald’s glimpse into the inner workings of Hollywood resonate even today. A truly great read.