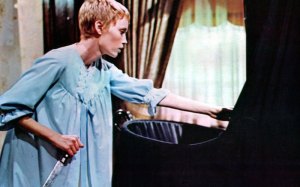 This demands a rewatch of the Roman Polanski classic; reading Ira Levin’s book, I couldn’t pick out many differences, besides Polanski’s decision not to show the baby referenced in the title, yet here I am calling one a classic and about to call the other basically an all-around disappointment.

Could Polanski’s direction, the cast’s performances, etc. and that one crucial choice I mentioned above be all that’s behind this stark contrast in perceived quality, or have my tastes changed to such a degree that I’d be as unimpressed with the film now as I was the book?

I hardly feel I can review the book until I’ve rewatched the film, that way I don’t come off looking like a two-faced idiot, since I fear the very things I’d downplay about the book are the same things I’d play up about the film. It’s been a while since I watched Rosemary’s Baby that first and only time, so who knows how accurate my recollection is?

I’ll just say this: like Peter Jackson did with The Fellowship of the Ring, Roman Polanski took what I feel to be rather silly source material and forced me to take it seriously. Rosemary’s Baby is a novel that could only have been controversial all those decades ago when it was first published. And that’s as much as I can say without first revisiting the film. 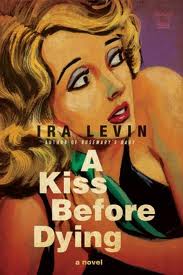 The early chapters of Ira Levin’s debut crime novel crackle and hum with the intensity of the best of James M. Cain’s work. With an economy of words and a genius for getting right to the damn point, Levin gets us right into the sick, twisted mind of a sociopath. Unfortunately, this is a premise which strains under the length requirements of even a short novel, and while Levin continually displays a penchant for psychological tension, the propulsive thrust of those early chapters is never matched.

Dorothy Kingship is a college girl with a rich father and an unexpected pregnancy. To Dorrie, who perhaps is a little immature, this just means that she and her boyfriend will have to get married and struggle to make it without her father’s money, but this is unacceptable to her boyfriend. After trying unsuccessfully to get Dorrie to have the pregnancy “taken care of”, he decides to take care of Dorrie, pushing her off the tallest building in town and making it look like a suicide.

To describe more of the plot would give too much away, but Dorrie’s boyfriend doesn’t stop there, and his callous inhumanity will shock all but the most desensitized readers. Levin convincingly portrays the mind of a striver who will stop at nothing to get what he wants, even as he struggles to create realistic non-psychotic characters to build a story around.