We all know and appreciate the many Star Wars references that pop up in everyday speech. If you don’t, then I can tell you now that this isn’t the book you are looking for. 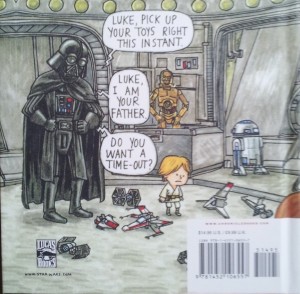 I imagine this book is the brain child of many “what if” moments Brown had when pondering the awesomeness that is Star Wars. 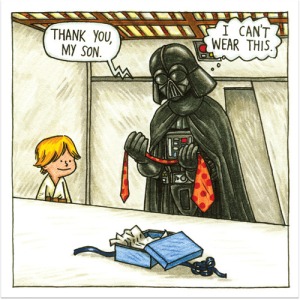 I could go on and on but if you’re a Star Wars fan, you already know this book rocks. If you aren’t, you won’t appreciate it as much as you should. And ladies, you don’t have to feel left out…Brown has also compiled Leia inspired comics in Vader’s Little Princess. 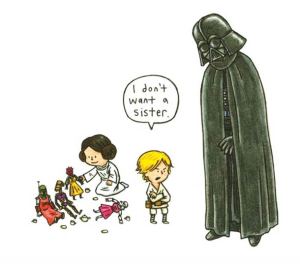 To learn more about Jeffrey Brown’s work, an atheist son of a minister who used to work in a wooden shoe factory in Holland, Michigan, then check out jeffreybrowncomics.com

On a separate but related note, there is a book called Admiral Akbar’s Guide to Everything…IT’S A CAT! And yes, there are a few traps too.

Check out The Blist for more reviews by genericwhitegirl. 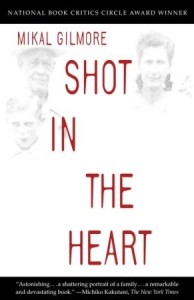 There is a small library of books at my work for employees’ reading pleasure. Pleasure might not actually be the best word, as most of the books are true crime novels, where death, murder, and mayhem are the topics of the day. When I need a book to read, I’ll randomly pick one…usually based on the cover or its name…much like the way I pick a bottle of wine.

Shot In the Heart is my latest pick and it didn’t disappoint. Mikal Gilmore is the brother of Gary Gilmore, a man who was put to death in Utah in 1977 for murdering two men. Although Gary’s story is enough to fill an entire book (Mikal recommends The Executioner’s Song by Norman Mailer if you are interested), Shot In the Heart is the story of Mikal’s entire family. Now I’m a sucker for multi generational stories…and this is no exception. Mikal details his family history, beginning with the origins of Mormanism. Not only does his mother’s family come from Mormon stock, but Gilmore is fascinated with the Mormon idea of blood atonement. This is the belief that the sin of murder is so heinous, only the shedding of the sinner’s blood will atone for it. Gilmore writes about how Utah’s capital punishment laws kept this doctrine alive by allowing an inmate on death row the option of death by firing squad.

Although Gilmore’s maternal lineage is defined by its Mormon roots, his paternal lineage has equally compelling stories. His grandmother was a psychic, and his father a con man with a spotty, incomplete past. After I got through the Mormon part of the book, I found myself reading stories of Harry Houdini, evil spirits, and haunted houses. I actually got the heebie jeebies reading some of his stories.

Gilmore then talks extensively about his parents and sibling’s lives. Although Mikal was lucky to enjoy his father’s love and relative family stability, he still describes the disfunction that dominated his brother’s lives and that carried into his own. With physical abuse, sibling rivalry, and unpredictable parents, I wasn’t surprised by his brother Gary’s life decisions. And although Gary became the “famous one” in the family, Mikal and his other brothers weren’t immune to poor decisions wrought from their lives’ trauma.

Although captivating, Shot in the Heart is sad in many ways. If you want an uplifting book, this isn’t the one for you. But as a study in human depravity, it’s worth the read.

Check out The Blist for more reviews by genericwhitegirl 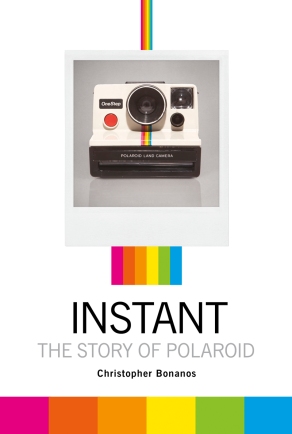 When I got this book for Christmas, I thought it was a random pick. A book about Polaroid? I suppose I have an interest in photography, but isn’t Polaroid a defunct, irrelevant company?

As it turns out, I quite enjoyed the book. Besides being an easy, relatively quick read, it was compelling. Although chronicling the history of this company might sound mundane, it is anything but. The company was started in 1937 by visionary Edwin Land, a man that the author compares to Steve Jobs in many ways. Land was inspired, determined, and believed in perpetuating a creative work environment for his employees. He encouraged innovation, even if it meant employees just thought about an idea for a couple of months. He valued research and quality at the expense of saving money. He even had a department called, “miscellaneous reasearch.” If that doesn’t scream Batman gadgetry, I don’t know what does.

What also makes the book engaging is that it begins with Polaroid’s conception in the 1930’s and goes through its triumphs and struggles to today. It’s fascinating to follow the company through such changing times – creatively, socially, and technologically. And it’s ironic to see how Edwin Land’s ideas, which were ahead of their time, were tied to a company later regarded as out-of-date.

If you are an art buff, this book may capture your interest. Polaroid was popular with artists like Ansel Adams, who was actually paid to test their products and give his feedback. Other artists and entertainers, like Andy Warhol, David Hockney, and The Talking Heads used Polaroid photos for album covers, collages, and other works. In an effort to revitalize the company, Lady Gaga signed on as their creative director in 2010! Then there are lesser known artists (at least to me) who had thought-provoking Polaroid works…artists like William Anastasi and Andrew Kertesz.

Did you also know besides using traditional Polaroid photos, several art forms emerged through Polaroid photography? Image transfers, emulsion lifts, and image distortion were popular ways to experiment with Polaroid’s instant film technology. And did you know that there are a few phone booth sized Polaroid cameras (the 20×24) that produce pictures the size of cocktail tables?

Although I mentioned Polaroid as defunct, out-of-date, and irrelevant, it is coming back. Even after reading the book, I was surprised to see Polaroid’s website, with all kinds of digital devices. I suppose the story doesn’t stop with the book…If any of this sounds interesting to you, then I’d encourage you to check out the book. A solid recommend from me.

Check out The Blist for more reviews by genericwhitegirl. 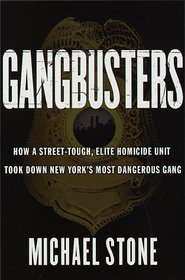 For some reason, I love reading about drug gangs. Not sure if it’s the drugs, the gangs, the violence, or what…I’m addicted to these stories. Better than the alternative, right?
This book is the true story of a Dominican gang, known as the Wild Cowboys, that operated in upper Manhattan and the south Bronx in the 90’s. Responsible for over 60 murders, a unit of detectives and DA’s from Manhattan, Brooklyn, and The Bronx spent years painstakingly investigating this organization.

Stone begins with the murder of Andrew Carmichel, who was killed for apparently no reason while driving on the freeway. He then describes a seemingly unrelated quadruple homicide in the Bronx, at a busy crack hole. Victims were randomly gunned down, some still clutching crack vials in their hands.

In a neighborhood where gangbangers would boldly brandish weapons to cops driving by, a change for the better seemed impossible. But to the investigators and attorneys who worked the Wild Cowboys’ case, impossible slowly turned into achievable.

Stories like this are interesting on so many levels. I like learning the ins and outs of how the gang operated – bringing in more money a year than many major corporations. I also find it interesting to see how the case came together over the years. This book is a definite recommend if you are into the true crime genre.

Check out The Blist to read more reviews by genericwhitegirl