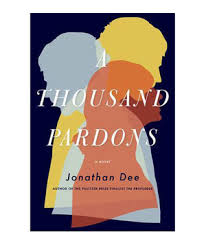 This novel by Jonathan Dee deals, unsurprisingly, with forgiveness — how and when to ask for it as well as receiving it. The novel is also, however, about redo’s — starting over if it feels like you’ve been living the wrong life and the complications involved in getting that redo off the ground.

As the story begins, Helen and Ben of Rensselaer Valley — an affluent suburb outside New York City — are seeing a marriage counselor. The sessions are ho-hum and seem not to be helping either with their dissatisfaction, when out of the blue, Ben breaks down and admits that he would like a divorce. Having been silent at home and at the sessions for so long, his assessment of married life stuns Helen: “I am bored to near panic by my home and my work and my wife and my daughter.” Ben’s feelings lead him to make some rather poor decisions at work, which get him into trouble of a public nature. The entire family becomes humiliated and ostracized in their community. While Ben is separated from his family and as the divorce proceedings are underway, Helen decides to look for work and finds a position with a very small public relations firm in Manhattan even though she has no background in PR and hasn’t been employed outside the home since they adopted Sara.

What is particularly interesting is Helen’s great skill: “She got powerful men to apologize.”  Whether it’s the owner of the Chinese restaurant chain whose employees go on strike or the married councilman caught on tape hitting his girlfriend, Helen helps these men make it better. In each case, she is able to get the client to identify his ultimate goal (win back customers, stay in office) and see the advantage of owning their mistake, of getting in front of it and taking away the power of the story. As she tells them, “You have to be completely abject, and not attempt to defend yourself or your behavior in any way.”  “People are quick to judge … quick to condemn, but that’s mostly because their ultimate desire it to forgive.” The success of her strategy attracts the attention of a large PR firm which hires her as part of their “Crisis Management” team, dealing with the likes of Pepsi, East European autocrats, and the Catholic Diocese of New York. Her skills are really put to the test though when trying to handle her own family situation and that of childhood schoolmate Hamilton Barth who has become a huge Hollywood star with problems.

The family dynamic between Ben, Helen and Sara is the driving force in the novel. Each feels as if he/she is living the wrong life. As a result, they make choices that hurt others, but should they apologize? If your goal was to put an end to the lifestyle you had that was wrong for you, what are you sorry for? By the end of the novel, the family dynamic has been turned on its head, but the main characters seem to feel more at ease in their own skins and with each other. It was an engaging novel and the topic of public pardon is certainly timely.