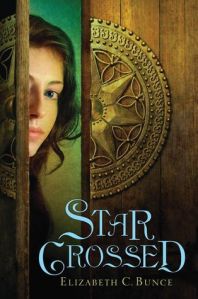 The older I get, the less often I am surprised.  I’ve learned to enjoy a well told story, even if I have a good idea where it’s going.  There aren’t any major surprises, the guy you think is going to be a bad guy is a bad guy, the twists are pretty predictable, and the biggest surprise is what doesn’t happen.  Even so, it’s well written and I love the main character, Digger.  Star Crossed doesn’t redefine the YA fantasy genre, but it’s a nice addition.

Digger is a thief and a forger in the kingdom of Gerse.  After a recent civil war, Gerse is now a theocracy that has banned other religions and all magic. The book opens as Digger has just escaped capture by the Greenmen – the goddess Cylestra’s Honor Guard and now also the King’s secret police.  Digger’s boyfriend was captured by the Greenmen, telling her to run rather than fighting them off himself.  He is presumed dead.  Digger is afraid to go back to her usual lair or to the man who hired her, uncertain if they had bad luck or if they were sold out.  Through luck she is able to get aboard a boat populated by young aristocrats and escape from the city.  She is given a place in an aristocrat’s household as a companion to a young lady getting ready to transition from childhood to adulthood.

Naturally, things aren’t entirely what they seem and Digger gets in over her head.  Digger is resourceful and smart, but she does get herself into trouble by thinking she’s smarter than everyone else.

Star Crossed is the first of an expected trilogy.  I have not been able to find an expected publication date for the third book, so…….

I recommend this as a good summer read.