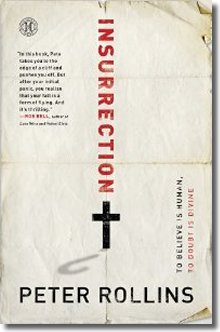 Insurrection: To Believe Is Human; To Doubt, Divine, the spectacular 2011 release by pyro-theologian Peter Rollins is a book that’s difficult to summarize or explain in brief. All the more difficult because I’d like to explain to EVERYONE, not just those that self-identify as Christian, why it’s so great.

In short, Rollins’ work hinges on the idea of dismantling what he sees as a wrongheaded understanding of God. He calls it the deus ex machina God, but we all know it as the bearded guy in the clouds calling the shots. Rollins asks his readers to look at the simple idea that “God is love” and from there begin to zoom out to the idea that God is manifest in the act of love, and is not some sort of celestial entity.

He gets to this through various means: Jesus’ words on the cross “My God, my God, why have you forsaken me?” which Rollins posits is the moment when God becomes an atheist, the writings of Mother Theresa in which she describes living her entire life with a core-deep sense that there was no God out there watching over her, but that she experienced God in her work with the poorest of Calcutta, and through various parables that he uses to introduce each chapter.

Rollins asks his readers to strip away what he’s previously referred to as the idolatry of God, until all that is left is a person willing to live a life of love, kindness, peace, and humility. Understanding that in living that life we are producing the place where God dwells. He goes on, then, to extrapolate the idea that God’s will for our lives becomes our own will for a life based in love, charity, mercy, and respect.

I would struggle to recommend Insurrection to those not familiar with the basics of the Christian faith, though I’d struggle equally to recommend it to anyone who holds to those tenets with too much fundamentalism as Rollins’ work towards an a/theistic form of an understanding of God is all but heretical by comparison to what most think of as Christianity. But to those open-minded enough, or to those unable to fully embrace or fully leave the faith, it’s something of a revelation.