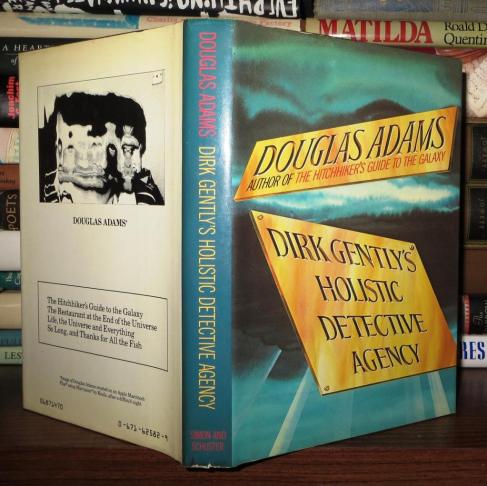 “If everyone knew exactly what I was going to say, then there would be no point in my saying it, would there?”

The Hitchhiker’s Guide to the Galaxy stands as the only book I’ve ever owned multiple copies of, and would you believe, that being the case, that I went this long without giving Dirk Gently’s Holistic Detective Agency so much as a cursory glance? That’s up there with being an avid follower of Community, yet knowing nothing of Mystery Team, a movie that almost has the feel of a Community prequel to it.

Perhaps, subconsciously, I wanted to put off reading it, at least until I could stand it no longer. Adams lived to write so little, and I’d read most of it already, in about one sitting no less, thanks all to the youngest of my two older sisters, the same one who’d introduced me to Weird Al by way of “Albuquerque” all those years ago. One day, by chance, I’d walked in on her watching The Hitchhiker’s Guide to the Galaxy. More specifically, the big “So Long and Thanks for All the Fish” number it’s known for.

It wasn’t long after that before I came home from one of my regular trips to the public library with the book in tow, insistent that I read it first before daring to watch the movie due to a peculiar hang-up I have. See, if I watch the film first, I almost wonder what the point in reading the book is. Difference, and loads of them at that, are to be expected, yet that doesn’t impact my resolve. Not until the film is but a vague recollection is it safe for me to read the book.

That is, unless my hand is forced, as it was when I was required to readThe Shining for a course by the name of Gothic Imagination. The contrast between the two, film and book, is well documented, King himself going so far as to discredit Kubrick’s adaptation. Thus it was imperative that I do the reading for the sake of being properly informed; on top of that, my combined adoration of Kubrick and King made it so that I was more than willing to make an exception, if only for the purpose of satiating my undying curiosity.

Now, one might ask why it only bothers me reading the book after the film, when not much changes if the order is flipped. Whichever comes first, it takes much of the surprise out of the other. Yes, but I’d rather what I picture as I read to be the product of my own imagination, not someone else’s, which is a bit of a challenge. To this day, I can’t re-read the Harry Potter series without picturing Emma Watson as Hermione Granger, Rowling’s conflicting descriptions be damned. Hermione was no fashion model of a girl, not as Rowling intended; still, she’ll always be remembered as Hermione, most of all inside my head. While comparing notes, gauging how close your vision of a character was to someone else’s, is a fun exercise, I can’t say the same about seeing everything you read through the lens of the film.

Which is why I sought out the book as opposed to the film. Unfortunately, however, our local library didn’t have the entire series. There were stories missing, and it drove the completionist in me so far up a wall that everyone below looked like ants. My sister, though, seeming to realize how greatly it bothered me, bought me what’s calledThe Ultimate Hitchhiker’s Guide to the Galaxy one Christmas, finally allowing me to finish what I’d started, which I wasted no time at all doing. Then came the film, one of the first building blocks of what would become a crush on Zooey Deschanel, as well as (man-)crushes on Martin Freeman and Sam Rockwell.

Years later, I would find a collector’s edition of the book that started it all at the Caliban Bookstore in Oakland, a place I’d surely be spending a lot of time in, and money at, if it weren’t for needing to take an hour-long bus ride to Pittsburgh, which costs $14 round-trip, in order to get there. Needless to say, once I relocate to Pittsburgh, I’ll need to invest in a proper bookcase to hold all my impulse buys. If only I’d left the place alone and never found out what I’d been missing all those years at Pitt, what I’d walked past many a time and thought nothing of.

Who would’ve thought that a single song could be the cause of so much? Isn’t it funny how fate works? In mysterious ways, it’s said, and I’d definitely agree. Without Douglas Adams acting as my gateway to Britain’s trademark humor, I doubt my tastes would be anything like they are today. He has become the benchmark. When I finished Terry Pratchett & Neil Gaiman’s Good Omens the words I used to describe it were as follows. It’s like The Hitchhiker’s Guide to the Galaxy, only more apocalyptic. For a while, I couldn’t watch anything with British humor without my thoughts pointing back towards Adams.

One series, just one, was enough to propel him into the company of King and Vonnegut, both of whom have written over twice as much. Part of me didn’t believe he deserved it, that he needed more in the way of longevity before he deserved to stand alongside giants such as those two, but I did my best to ignore it.

Except it didn’t stop me from worrying, mere seconds after orderingDirk Gently’s Holistic Detective Agency off of Amazon, that it would prove to be a mistake, that I’d wasted my money on a dud from a one-hit-wonder of sorts. I’d scanned the opening pages prior to checking out and they were nothing that would make me read on if not for Adams’ name being on the cover. That’s the thing about context, though; it matters a whole hell of a lot more than you’d think. Because those same opening pages came as a surprise of the most pleasant variety when my copy finally arrived in the mail, days before it was estimated to arrive, and seven hours before Amazon saw fit to send me a text alerting me of its delivery.

Adams’ comedic talents are so well-renowned and all-encompassing that it’s easy to miss the simple fact that he can write with the best of them. He’s never not concerned with enlightening his readers one way or another, yet in this case his efforts seem more transparent, and I mean that in the best way possible. The end result reminded me, appropriately enough, of Vonnegut’s finest and, ironically enough, ofGood Omens. Even in that rare instance in which a joke misses the mark, the deftness of the writing makes it so you barely notice.

Likewise, Adams weaves a complex and bizarre, yet strangely sensical narrative. There’s an internal consistency, so to speak, to the absurdity and, in the end, it reveals itself to not be absurd at all, but part of a grand design you’d simply been blind to, one that only Adams is capable of crafting in such perfect fashion. As a fellow writer, I stand in awe, knowing I’ll never be able to do what he does and that it would be a waste of time trying. Heck, the combined forces of Pratchett and Gaiman fell short of the mark with Good Omens. While one of the best books I’ve ever read, and not far behind Adams’ works if ranked by number, Dirk Gently’s Holistic Detective Agency is in an entirely different stratosphere occupied only by Adams’ other works and a lucky few, which include Keyes’ Flowers for Algernon and  Vonnegut’s Breakfast of Champions. Books, and authors, like this are members of an endangered species, so if you happen to spot one of them, cherish the sight.