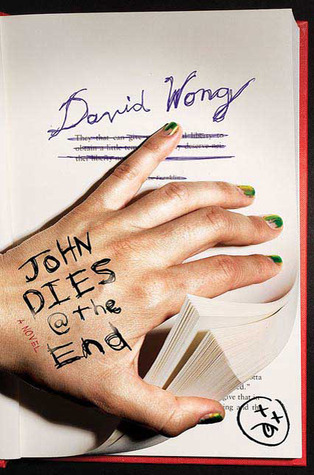 “STOP. You should not have touched this flyer with your bare hands. NO, don’t put it down. It’s too late. They’re watching you. My name is David Wong. My best friend is John. Those names are fake. You might want to change yours. You may not want to know about the things you’ll read on these pages, about the sauce, about Korrok, about the invasion, and the future. But it’s too late. You touched the book. You’re in the game. You’re under the eye. The only defense is knowledge. You need to read this book, to the end. Even the part with the bratwurst. Why? You just have to trust me.

The important thing is this: The drug is called Soy Sauce and it gives users a window into another dimension. John and I never had the chance to say no. You still do. I’m sorry to have involved you in this, I really am. But as you read about these terrible events and the very dark epoch the world is about to enter as a result, it is crucial you keep one thing in mind: None of this was my fault.”

I am trying to think of a weirder book than this (from my childhood: Sideways Stories from Wayside School comes to mind; I also remember Weetzie Bat being very strange but I may have just been too young to understand it.) Weirdness isn’t bad. In fact, this was a really entertaining book that was as funny as it was genuinely creepy. I’m still not completely convinced that I understood everything that was going on, and I am fairly certain that if I made this observation to the titular John, he’d simply nod and comment that I can’t be expected to; after all, I haven’t ever taken the sauce.

There is something very unique, not just about the plot — which is obviously so — but about Wong’s writing and his ability to, in the face of such weirdness, pretty thoroughly define his characters without really seeming like he is trying very hard to at all. By the end of the book, I absolutely understood the motivations and actions of each character, and that’s without any backstory worth speaking of for most of them.

Sometimes I worry that my review attempts get a little pedantic, talking too much about nuts and bolts, and since doing so for this book just seems kind of inherently wrong, like a square hamburger patty, I’ll just shut up here and say “READ JOHN DIES AT THE END.”

I read John Dies at the End a while back and enjoyed it quite a bit. I think, when trying to describe it to a friend, I went with, “A little like Lovecraft on a really bad trip as filtered through a 12 year old boy’s sense of humor.” It was unhinged and ridiculous and a lot of fun. I’ve since seen the movie and…enjoyed it not as much as the book.

I never heard nearly as much about the sequel, This Book is Full of Spiders, Seriously Dude, Don’t Touch It. Most of what I heard was pretty positive–it’s a stronger book with better writing and a more coherent plot. I’m game for that.

So, how did the new book go over?

Read all about it at The Everyday Alchemy Lab.

I wanted to like this book a lot more than I actually did.  Let me start out by saying that this book is written by a Cracked.com editor, so you can get a feel for his writing by visiting that site.  I happen to enjoy most of the articles on Cracked, so I thought that this would be a pretty funny book.  This book also had amazing reviews on amazon.com, so I thought I couldn’t possibly go wrong.

The main problem I had with this book was that it just wasn’t funny.  I didn’t laugh until the last chapter, which was very disappointing.  A lot of the humor was based on the characters being complete morons, but instead of finding their actions amusing I just found them annoying.  There are several points in the book when the characters act impulsively and completely screw everything up, and this is presented in what I assume is supposed to be a humorous tone.  Instead, I found myself extremely frustrated that I had to read about what these idiots were doing.  Their perception of situations seemed to change constantly and it was difficult to keep track of who thought what at any particular time as they would vacillate between opposing positions from page to page.

The book is also extremely gory.  I probably wouldn’t have minded as much if I’d been expecting a gory book, but I’d been expecting a funny one.  Little of the gore could be described as funny, except perhaps an incident on a turkey farm.  Most of the blood and guts was merely stomach-turning.

Perhaps my least favorite thing about the book was all of the philosophizing and random God/Jesus references.  I came into this looking for a good laugh.  The book was marketed as a comedy, and although I do like smart comedy, I don’t need whole chapters detailing the author’s views of crowdthink, human nature, and pop psychology about why we fear zombies.  Throw in a few random but serious references to God by some decidedly non-Christian characters and cue my eyerolls.