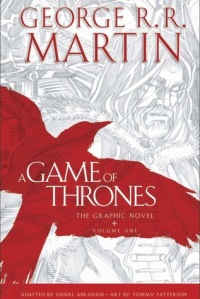 The first volume of the A Song of Ice and Fire graphic novel adaptations covers the first half of A Game of Thrones, the first book in the series. As Martin himself states in the intro, this is an adaptation of the book only, and has no relation to the HBO series (which is the shit). Actually, it sounds like certain things (like the design of the Iron Throne and the appearance of the characters) were deliberately differentiated from the series for legal reasons. All in all, I think I prefer the show’s version of Martin’s story to the graphic novel, but it was pretty good all the same.

Vol. 1 takes us from the first meeting of the Others, through Bran’s fall, the murder of Jon Arryn, the appointing of Ned as Hand of the King, Jon’s induction into the Night’s Watch, Dany’s marriage to Khal Drogo, and Catelyn’s flight to King’s Landing. The story was adapted by fantasy author Daniel Abraham (a former student of Martin’s who also writes urban fantasy and science fiction under pseudonyms), and he does a great job. It’s always hard to judge these sorts of things when you know the story so well (your brain just kind of fills in the missing pieces of the story that maybe wouldn’t make much sense to non-book readers), but it felt like there was nothing missing, despite that Abraham obviously had to cut a lot of material in order to cram hundreds of pages into a 200 page graphic novel. Another indication that this is a quality adaptation is that it never feels crammed.

Probably the only thing I had trouble with is the artwork. Martin chose Tommy Patterson out of hundreds of candidates, and while I don’t think anyone would dispute that he’s very talented, the way he portrays most of the characters irks me. Everyone is pointy and harsh, and they all have tiny eyes. To me, this makes everyone, even the ‘good guys’ look evil. But it was his women I had the biggest issue with. They all look the same, first of all, and same in this instance means skinny with slender faces, long hair and Barbie-type bodies. The men are at least somewhat differentiated and realistic looking (excepting Khal Drogo, who is monstrously large), but the women look like they all stepped out of some thirteen year old’s fantasy. I think a lot of this is just my vision of this world not matching up with the artist’s, but it was an issue for me, regardless of the cause.

Recommended for fans of the book or show. Wouldn’t necessarily recommend it for someone who’s never been exposed to the story before.