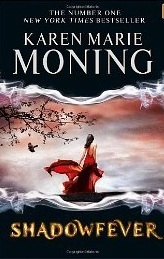 At the end of January, I finished off The Fever series by Karen Marie Moning. As expected, Shadowfever picks up mere seconds after the end of Dreamfever (see my previous review) so I was waiting with bated breath for the book to arrive in the mail. Mac is still stuck in the other world, led by The Beast who has been protecting her in its own wild way. She assumes it was sent by Barrons, but in a swift turn of events she kills the creature and pushes him off a cliff. To her dismay, the Beast is revealed as someone very important in her life. Once again, Mac is alone and full of grief, shaking her fists at fate. Except this time around, she stops the moping and rises to the occasion. She becomes renewed with a sharp, cold vengeance. She vows to end this apocalyptic treasure hunt for the book and use its power to avenge the death of her loved ones.

This book clocks in at 671 pages, much longer than previous ones in the series. And oh boy was it wild ride where all the mysteries were revealed. We find out what happened to the Unseelie King, whether Mac is truly human, what the hell is Jericho Barrons and all importantly, who killed Mac’s sister, which started this got this whole crazy train a’rollin. I had to re-read the ending twice to comprehend all the ramifications of what took place. The reveal of the King was quite unexpected, but everything was in its right place in the end.

I would recommend this book series to paranormal romance fans in need of a new series to consume. I never actually read the first book and have no regrets.

Read this review and other waffle on my tumblr.