City of Ashes is the weakest installment in Cassandra Clare’s Mortal Instruments Trilogy,* and that’s saying something. I’m not giving it one star, because I did rush through it in some enjoyment, but as discussed in my previous review of City of Bones, it was enjoyment based mostly on seeing what nutbag thing was going to happen next rather than enjoyment based on good characters, good plot, and exciting developments. Book one had the advantage of introducing the world, and book three (as problematic as it is) has a crazy amount of plot development and action. This one mostly felt like filler to me.

*I’m not counting books 4-6, which sound mostly like cash cows to me.

The basic plot of City of Ashes is that Jace and Clary believe they are brother and sister and they are also in love with one another, so this causes them angst. That is 75% of the content of this novel. Jace basically turns suicidally depressed and Clary decides to try her best friend Simon on as a romantic partner, mostly because she wants someone to mack on, and she can’t mack on Jace. 95% of her thoughts surround Jace, how beautiful he is, how tragic, how much her DNA wants to be with his DNA forever BUT IT ALREADY IS BECAUSE THEY ARE BROTHER AND SISTER WAAAAAHHH. There’s also some stuff in there about Simon turning into a vampire, Jace’s adopted family rejecting him because they think he’s working for Valentine (?), and Valentine causing trouble by stealing the Mortal Sword, killing all the Silent Brothers, and threatening to call up a shit ton of demons to overrun the Earth. Clary also seems to be developing SUPER DUPER SPESHUL MAGICAL POWERS that no one has ever seen before, and Alec continues to deny that he is gay for Magnus Bane.

The stuff with Jace and Valentine is probably the most interesting, or at least it had the most potential to be interesting. Jace’s desire to be a good person and his love for Valentine as his father conflict with one another in a way that could have been mined for content, but Clare mostly just uses it to cast suspicion on Jace that the reader never believes for a second. The stuff with Simon, again, also interesting, although I laughed out loud at the scene that pushed Simon to finally visit the vampires. They all visit the faerie underworld or whatever it’s called and because Clary tastes faerie food, the faerie queen won’t let her go until she’s been kissed with the kiss she truly desires. I will give you three guesses as to whose kiss that is, but you will get it in one. Simon witnesses this, er, display, freaks the fuck out, and then goes and gets himself turned into a vampire.

Really, though, I don’t blame him. I might even sort of understand the impulse for Clare to milk the Jace/Clary tragedy for all its worth, as long as she didn’t cross the line between conflict and exploitation. All the pining doesn’t cross the line. It can easily be interpreted as both characters coming to terms with their awful circumstances. But that kissing scene? WAAAAAY crosses the line. She doesn’t just manufacture a moment for her to characters to kiss. That would be bad enough. And she doesn’t just have them kiss each other quickly and be done with it. She doesn’t even make it a lingering kiss filled with regret or whatever. No. What does she have Jace and Clary do? FULL ON FUCKING MAKE OUT PASSIONATELY IN FRONT OF EVERYBODY AND EVERYONE THEY KNOW. WHILE THINKING THEY ARE BROTHER AND SISTER.

END_OF_DOCUMENT_TOKEN_TO_BE_REPLACED 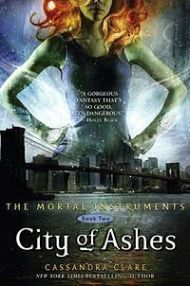 City of Ashes is the second in Clare’s Mortal Instruments series, so there are spoilers ahead. I’d say consider yourself warned, but honestly I’m probably doing you a favor here anyway.

We pick up shortly after the events of the first book, Valentine has escaped and Jace is now under suspicion of being in cahoots with him.  Jace is to face The Inquisitor to prove or disprove his innonence, while suddenly important magical items go missing and several downworlders have been attacked or murdered. The group soon finds out that Valentine is responsible for all of these events and is attempting to create a demon army in order to basically take over the world.

Sigh. This book. I wanted to like this book. Clare took a few steps in the right direction by splitting up her narrative between different characters, probably in hopes that we would forget how damn boring Clary is.  The events in the first few chapters were actually pretty cool and kind of twisted, and I allowed my hopes to raise up a little bit. Well, that was pretty much all for nothing because Jace continues to be arrogant and perfect, Clary perfect and boring, and Simon is still just plain old annoying.  There’s a big chunk in the middle where not a whole hell of a lot happens and there are some extremely clunky and obvious HEY THIS IS A HINT I BET WE HEAR ABOUT THIS LATER moments. Among them, the fact that Clary and Jace probably aren’t related (because of course they’re not, my reaction to that revelation in the first one was “bullshiiiiiiit!”). Another thing that bugged: no one ever freakin dies. Listen, I don’t need my characters lined up for slaughter but when you have a huge battle and are epically outnumbered, the only logical conclusion is that someone fucking dies, alright?! Ahem, sorry.  Anyways, that only serves to take all the tension out of the story because you know damned well that everyone is magically going to be ok (sometimes literally).

I will probably read the third book (which was originally the end to the series, then a few more got tacked on) because I’m a masochist and want to know what happens anyway, but after that I’m done.  If you need a light, not-too-hard-on-the-brain read, this is definitely a serviceable series, but it’s not anything I’ll be raving about anytime soon.