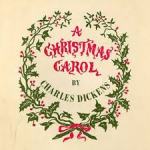 After my failed attempt to get in the holiday spirit by reading Holidays On Ice, I picked up the surefire solution, Dickens’ A Christmas Carol. Nearly all of us know the story … Ebeneezer Scrooge is the original miser who is visited by three ghosts on Christmas Eve in an attempt to redeem him.

You may think you have heard or seen the story so many times there isn’t a point to reading the book, but you’d be wrong. The book is perfect. It manages to be festive and foreboding, comical and creepy without the sentimentality that comes with so many holiday stories (many of which are interpretations of this very story).

Although it is relatively short – 170 or so pages – I spent a week reading it leisurely to my kids. Whether you read it alone, out loud to your family or find an audio version you can enjoy, I would highly recommend making this book part of your holiday traditions.

I typically have trouble ramping up the holiday spirit so this year when I had the decorations up and the shopping done I thought I’d read something to help. I mistakenly chose David Sedaris’ Holidays On Ice. I’ve had the book on my book shelf for many years. I’m familiar with the “SantaLand Diaries,” the story that leads the book, and I would consider myself a David Sedaris fan, but Holidays On Ice was not the book I needed.

I would highly recommend the first essay, “SantaLand Diaries,” in which Sedaris details his experience as a Macy’s elf named Crumpet. In a twisted way, it just might put you in the holiday spirit. At least you’ll be able to laugh at some of the more stressful moments, like waiting in line to see a Santa that terrifies the kids and shopping amongst the masses. It’s funny, sad, pathetic, revealing and unfortunately, honest.

Although I would recommend the book on the strength of “SantaLand Diaries” alone, I also enjoyed “Dinah, the Christmas Whore,” which recounts a Christmas when the Sedaris family rescued a prostitute from her abusive boyfriend and invited her into their home for the holiday.

But do yourself a favor and skip “Season’s Greetings To Our Friends and Family,” the Dunbar family Christmas letter, which goes from sad to awful to sickening, and “Christmas Means Giving” in which two neighbors go to grotesque lengths to outdo each other during the holiday season. Yes, I understand they are sarcastic, but I thought they were just too creepy and outlandish to be funny.

Moore, you’ve done it again. This book was laugh out loud hilarious: truly a joy from cover to cover. Many of the characters in this novel first appeared in other books so it would be neat if you could read all the others first and then watch them interact in this odd little world. I had only read one other so most of the characters were knew to me but I loved knowing more back story than was provided. (Read and reviewed, 2010 September 5)

Read this, read it now. I’m going to re-read it around the holidays to give me some perspective around that busy time of year.

And I just completed another re-read, wrapped up at the end of Christmas Day. Irreverent and clever and a reminder no matter your day, things could always be worse if a dumb angel was involved, and El Niño. The characters are thrown together in a comedy of errors, and a final act that takes an unexpected turn. It is the perfect thing to cozy up with after the gifts are open and dinner is behind you

Merry Christmas to all!

I’m a big fan of Christmas, but even I have to draw the line somewhere. While I’m not above buying gifts in July, I have no patience for people who put up twinkle lights in October and even I can only sit through so many viewings of Its a Wonderful Life before reaching for the insulin. So when I spotted The Dreaded Feast in a used book shop the week before Thanksgiving, I thought it would be a nice antidote to the super saccharine influence of the holiday season.

It is an antidote, I suppose, in the way that morphine would be an antidote for a headache. It’s not just that the collection of essays is too snarky for me. It is (and that is saying something) but I can’t really blame the book for that. After all, the back cover says in big block letters, “For people who aren’t so crazy about the holidays.” I ignored the warning, thinking surely that the negativity would be balanced with redemption. So, my bad there. But what really irritated me was that the humor-ish essays were all very obvious. Let’s face it, Christmas is a pretty easy target. There’s a lot of room there for mockery: the fruitcake, the carolers, the ugly sweaters. Now that I think about it, ugly sweaters were pretty much overlooked in this collection, which seems odd (note to self: write Dave Barry-esque essay on ugly Christmas sweaters for publication before Jan. 1). The point is, there’s lots to make fun of, but making fun and making something funny aren’t the same thing. For all its jokey criticism, the essays just didn’t elicit many chuckles from me.

Not all the essays are humorous, though. John Cheever’s Christmas is a Sad Season for the Poor is a thought-provoking tale worthy of its own essay. Last Last Chance by Fiona Maazel and Oh, Christmas Tree by Augusten Burroughs are both curious stories that are more interesting to me than a study of the office Christmas party. And don’t even get me started on Hunter S. Thompson’s contribution—what the hell was that about? The point is, this is an anthology, so one would expect a mixed bag.

The more I read, however, the more the collection as a whole started to bug me. Overall there just didn’t appear to be any cohesive theme. The selections seem so random, like the inclusion of a single scene from a play called “The Truth About Santa” and an anonymous 17th century diatribe on the vanity of the Christmas holiday. It feels like the editors simply selected the first thirty pieces of writing about Christmas that weren’t The Gift of the Magi and called it a day.

I’ve read some excellent short-story collections in the past, where each piece of writing stands independently while also contributing to a whole. Unrelated works can sometimes build on each other and shine a light on similar themes, making each more thought-provoking or worthwhile than it had been on its own. Sadly, The Dreaded Feast isn’t one of those collections. 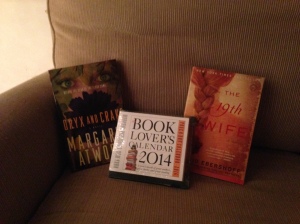 My surprise gift arrived in the mail yesterday, from Ashlie! It is perfect – I have been very excited to read Atwood’s trilogy, and I am looking forward to trying The 19th Wife. The calendar is going with me to work today.

Ashlie, thank you so much. It was a very thoughtful gift, and I was so pleased and surprised. Also, thank you Jen for organizing!

The irrepressible Flavia de Luce is back for a 4th go at some amateur sleuthing. When a world famous film star is murdered while filming in the de Luce mansion, Flavia is like a dog with two tails. Is it any good though? Find out here