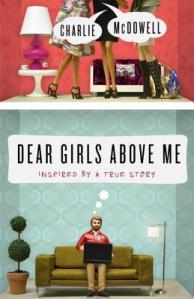 This was a fun read, but I had some issues with it.

Charlie McDowell* started the popular Dear Girls Above Me Twitter feed on a whim, and he got a book deal out of it. Twitter-to-Book deals always seem sketchy to me, but this one had gotten pretty good reviews, so I picked it up from the library. Like I said, it was fun, but as this is a supposed novelization of the feed, it doesn’t even have the virtue of really being about McDowell’s life, and in parts it seems like he really had to stretch it to make his ‘character’ have a believable arc, so the book wouldn’t entirely read like it was a commercial ploy to exploit these two girls even further.

*He’s the son of Mary Steenburgen and Malcolm McDowell, and to his credit, this isn’t something he highlights in the book, except for the horrifying story of the time he caught one of his friends, er, jerking his sausage, to a blurry sex scene his mother had done in a film before he was even born.

Make no mistake, the things the girls say are ridiculous and hilarious, but shoehorning ‘Charlie’ in there as well just felt forced. The book ends with ‘Charlie’ supposedly having learned something from his interaction with the girls, but I’m sort of at a loss to figure out what that something is. If you just want something funny, you’ll probably love this, though. And the ending was pretty great — I laughed out loud in the coffee shop where I was reading. I won’t spoil it too much, but I will tell you that it involved mice, a broken sewage pipe, and the girls not following directions.

If you’re looking for a quick read you could do worse than this, but don’t go in expecting anything deep.

Come for the girls, but stay for the Charlie.

I don’t know how I stumbled upon it, but a while back I started following Charlie McDowell’s twitter account (@CharlieMcDowell) which is basically just a series of little “letters” he writes to the two girls who live above him, in response to some of the inconceivably vapid comments they make. After enough time and following, it appears he decided to write a book inspired by his life under these girls, and the result is absolutely hilarious. No seriously, I actually laughed out loud at a number of parts, and kept getting asked (by my mother, yes) what exactly was so funny. What really sold me on this book was not the girls who sparked the story and the things that they say, but McDowell’s writing. I wouldn’t say that his humor is for everyone, but I personally find him to be clever and an absolute riot: a seamless blend of self-depreciation, wit, and absurdity.

If you’d like to hear more about the whole thing and what I thought about it, my full review can be found here.