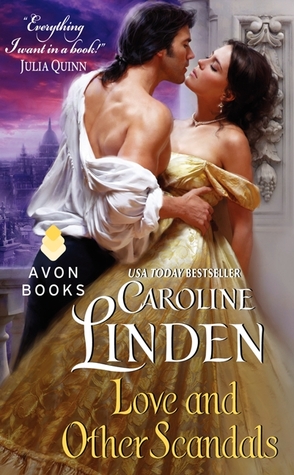 Charles de Lacey had a massive falling out with his father, the Duke of Durham, because when he was 22, Charlie wanted to marry a penniless girl of unsuitable family, and his father made sure the marriage never happened. Now Charlie’s father is dead, and he discovers that the late duke also had a youthful indiscretion, but that said impulsive marriage may cost Charles his title as duke, and make him and his younger brothers illegitimate. While his two brothers initially started trying to sort out the whole scandal, one through legal means and the other by tracking down the blackmailer, they’ve both gone and fallen madly in love with their new wives, demanding that Charlie himself save the ducal title, his estates and their fortunes.

Gerard de Lacey may be declared illegitimate because of a clandestine marriage his father, the recently deceased Duke of Durham, entered into in his youth, before he married Gerard’s mother. A year before his death, the Duke started receiving letters blackmailing him. Now the London gossips won’t stop talking about the “Durham Dilemma”, his brother Edward is busy trying to prove their legitimacy through legal means, and his older brother Charlie, the heir, is mainly staying far away from the whole business. Gerard thinks the best way of solving the situation is tracking down the blackmailer. He also plans on finding himself a rich wife as soon as possible, so that he can secure his future, even if the scandal is not resolved in the de Lacey brothers’ favour.

First of all, I have no idea what the heck is going on with the cover of this one. God knows what she’s actually doing, my husband has several theories, but all of them pretty much qualify in the NSFW category, so we’ll just leave it at that. Covers like these make me so very happy that I have an e-reader, because while I’m really not at all ashamed to admit that I enjoy romance novels, and read a lot of them, this is just not a cover I would want to display while on public transport on my way to work and back every day.

Lord Edward de Lacey is second of the Duke of Durham’s three sons. On the Duke’s deathbed, he confesses to Edward, and his youngest son, Gerard (the heir to the title is a wastrel and a rake who apparently had a massive falling out with his dad, and doesn’t show up in time for the passing of his father) that he has a rather inconvenient secret he’s been keeping. In his youth, before he became a Duke, he married a woman in secret, and never really made sure the marriage was dissolved or checked whether said woman was dead before he married his sons’ mother. He’s been receiving threatening notes that suggest someone knows about this, and the three young lords will need to figure out what actually happened, or their entire inheritance is at stake. More on my blog.