I’m so bad about posting (and linking to) my reviews. Links below to reviews 27 through 36.

#27: The Dirty Life by Kristen Kimball

#30: Confessions of a Teen Sleuth by Chelsea Cain

#31: The Round House by Louise Erdrich

#36: You Are One of Them by Elliott Holt

Title: Beautiful Ruins
Author: Jess Walters
Source: from publisher for review
Rating:
Review Summary: I was completely blown away by the reality of this novel, with its intense emotion; believable characters; and insights into human nature.

To explain all the things this book is about would require a long summary, such as that on goodreads, but here is my best attempt at a shorter description. Beautiful Ruins  involves two main stories. One, set in 1962, describes a meeting between a young, Italian innkeeper named Pasquale and a beautiful American actress named Dee. The other story follows Pasquale as, fifty years later, he tries to find the actress he felt such a connection with. In between, we get to know the many people who become part of their story, including a young assistant producer becoming disenchanted with Hollywood and a young man struggling to find his place in life.

First, an admission. I only gave Beautiful Ruins by Jess Walters three stars. (proceeds to run from several other cannonballers who gave it higher rankings).

I can understand how this book would rank higher for other readers, and I understand that in many, many ways this is a beautifully crafted novel which opens up one layer at a time. That Jess Walters weaves the narration in such a way that the reader grows with the characters and sees the maturity, the humanity, and the lives which are built out of the beautiful ruin of the choices we make.

That being said, this one didn’t light up my heart.

First, the basics: Beautiful Ruins is the story of Pasquale and Dee, whose lives intersect for a week in Italy in 1962 and again 50 years later. It is also the story of the lives of the people who bring them together and keep them apart. It’s a story which tries to tell us something meaningful, but doesn’t fully land on that idea until the last 30 or so pages of the novel. The book wanted to say something profound about love, hope, doing the right thing, and knowing our place in life – and most emphatically what wanting something more than what is our destiny can do to our psyches. These are big ideas and meaningful places to meditate. 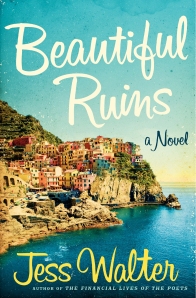 Honestly, my very first reaction to this book was that I was disappointed that Jess Walter is a man. What with the girly script and New Girl’s Jess Day fresh in my mind (did you guys see what happened yesterday?!) I just automatically assumed that Jess Walter was a lady author. I was wrong. There was a very prominent and chiseled fancy man pictured on the back cover flap.

Luckily, I got over it pretty quickly and my disappointment in the author’s gender didn’t hinder my enjoyment of his story. This book was lovely. I read it all in one day, the largest chunk of which I spent pigging out at Pita Jungle, eating shawarma and baklava and drinking tangy fruit-flavored iced tea. It was a good day.

The plot of Beautiful Ruins is hard to describe. There’s a young Italian man in a very small village who watches as a beautiful dying American actress comes to stay at his villa. There’s a Hollywood film producer and his increasingly jaded assistant in the present day. An aging musician halfway around the world has a midlife crisis. And in the 1960s, Elizabeth Taylor and Richard Burton are shooting that famous disaster of a film, Cleopatra, as their affair is splashed all over the headlines. There are a bunch of characters and plot threads and time jumps in this story, but the way that Walter weaves all of them together into a cohesive whole is one of the main pleasures of the book. I got this sense of elation as everything started coming together near the end that only happens with the really good stuff.

This story was sad and happy and joyful and terrible and wonderful, and I loved it.

(My only complaint was that something about the ending felt . . . off. And I can’t figure out what it was. I was all set and ready to give this five stars (I could feel it in the build up), and I still might when I come back for the inevitable re-read, but for now only four and a half because the ending kinda jarred me out of the lovely little funk I was in reading it almost straight through, for hours and hours. Either way I’m on a roll with books this year. So many great ones right out of the gate — 4.5 stars.)