Abby McDonald’s Jane Austen Goes to Hollywood is a charming young adult modernization of Austen’s second most famous novel, Sense & Sensibility. In McDonald’s version, Grace and Hallie Weston have just lost their father and due to the incredible selfishness of their stepmother Portia, are now penniless and evicted from their beautiful Victorian home in San Francisco. Luckily, their mother’s cousin has a guest house at his swanky home in Beverly Hills, and the family moves there, much to the dismay of Grace (Elinor) and the joy of Hallie (Marianne).

Any time you have a modernization of an Austen work, you’re starting at an advantage, at least in my book. Austen is one of my all-time favorite writers, and as such, her source material has generally made for good re-imagining, whether it is in film (Clueless) or other literature (Bridget Jones’ Diary). Essentially, McDonald would have to really mess up to ruin this story. She doesn’t; though I did find some of her characters and modern twists less well-done, I generally enjoyed this book. The interesting aspect of this particular version of the story is that unlike the original source material, Hallie is actually the more sympathetic/identifiable sister. Grace is such a wallflower sad sack that it’s hard to feel much for her. She has the same weight of the family maintenance on her shoulders that Austen gives Elinor, but with none of the bravery, aplomb and maturity. In fact, she’s the younger sister here and perhaps this was McDonald’s intention all along – to imagine a world in which the Marianne character shines instead. All I know is that I left this book thinking that Grace was a poor representation of the awesomeness that is Elinor. Hallie is actually more appealing than you initially expect; in her relationship with her musician boyfriend (the Willoughby character) she has the same ups and downs that most of us go through and it almost seems less crazy than Marianne’s shenanigans in the original. Perhaps this is because without the social conventions of 19th-century England, it feels less desperate and more familiar.

Another issue I took, generally, is that in a modernization, some of the plot contrivances become even less believable than in the original. For example, the idea that the two minor children would be completely uncared for in the event of their father’s death without a will is a little hard for me to believe. I assume there are laws and means for their needs to be addressed. In both the original and McDonald’s version, I continue to struggle with the appeal of the Edward Ferrars character (in this one he is called Theo). At least in the original material you can blame societal pressures on Edward’s lack of a backbone with regard to how his sister treats folks. In this modern version, however, it seems unlikely that someone would find Theo appealing when all he can say in response to his sister’s ill treatment of the Weston girls is basically that he doesn’t get it and oh how funny we both have crazy sisters. WHAT? I know one cannot choose their family and all that, but if I were Grace and the man that I had feelings for didn’t say a single thing in my defense to his sister, I’d cut my losses then and there.

Overall, this is an enjoyable, quick read. I think the things I found unappealing in the novel are perhaps just due to the nature of the story and its unlikelihood of happening in modern times. With Emma and Pride & Prejudice you have more easily-transferable plot ideas (being blind to your own faults, overcoming initial hurt feelings and hatred to discover love) and I think that’s perhaps why modernizations of those work better for me. If there are other Sense & Sensibility remakes I’ll have to see if they work better or worse than this one. 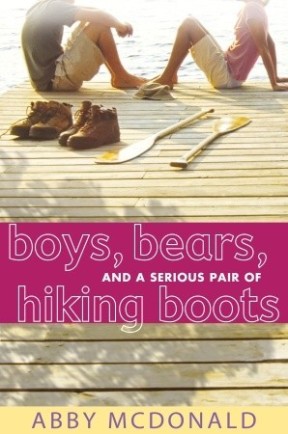 Abby McDonald’s young adult novel Boys, Bears, and a Serious Pair of Hiking Boots is the story of 17-year-old Jenna, a bright, enthusiastic high school junior spending the summer in the wilderness of British Columbia with her hippie godmother Susie. As a leader of the Green Teens, her high school’s environmentally conscious activist group, Jenna views the summer as an opportunity to commune with nature like she’s always dreamed – and perhaps run into a hot, plaid shirt-wearing mountain man to boot. What she doesn’t expect is that sometimes nature doesn’t always turn out like you’ve anticipated, and that even the noblest ideals must be compromised.

I really enjoyed this book; it was lighter fare YA reading, but it’s entertaining and sweet. Jenna is an endearing heroine. She’s flawed but realistic, definitely someone you root on throughout her journey. Desperate to avoid a summer with her mom and grandmother at a retirement community in Florida (while her father travels to Sweden on business), Jenna decides to make an adventure out of her summer and spend it with her mom’s college roommate who is opening a B&B in the small town of Stillwater in British Columbia, Canada. She arrives and quickly discovers that things aren’t necessarily going to be perfect: the house is a mess while Susie and her husband Adam renovate it in prep for the late summer opening. Add to that Susie’s angry Gothic stepdaughter Fiona (with whom she must share a room at first), and some seriously crazy adrenaline-junkie local boys, and Jenna has her hands full navigating the new scenery. She takes to the challenge with aplomb – risking life and limb learning to kayak, rock climb and hike, all the while slowly worming her way into everyone’s hearts.

Naturally there is a love interest – the smolderingly hot Reeve, a local teen with a quiet, brooding, pensiveness. In other words – the perfect love interest in a summer romance young adult novel.  Ethan and Grady, the Johnson brothers, make up the rest of the young group of friends with whom Jenna becomes acquainted throughout the summer. Ethan is the sweet, cute friendly type. Grady is rude, loud and obnoxious, but a good guy at heart.

There’s not really a lot of plot to this book – it’s more like reading someone’s summer camp journal. At the same time it is still a page-turner. I kept wanting to know what Jenna learned or where she’d go next. It makes me long to hit rewind on my life and get that summer job as a camp counselor that I never took. But I wasn’t outdoorsy then and I’m certainly not now, so I’ll live vicariously through Jenna instead. I recommend this for anyone looking for a lighthearted, entertaining beach read this summer.