(So clearly I am not going to manage a double Cannonball this year. Or a full Cannonball. Or even a half Cannonball. But BY GOD I will at least complete the quarter, so at least  have not totally failed.)

Joyce Carol Oates’s tale of Quentin P___ is unpleasant. And I know it’s supposed to be that way–after all it’s a dip into the mind of a serial killer–but it’s more than that. He is the antagonist of his own story, making the reader into the protagonist. You spend your time reading his diary, and begin to get the creepy feeling that this is something you should never have seen. Quentin is not likable. You don’t root for him as you do with Dexter or Hannibal Lector or even Patrick Bateman. Quentin is all the violence but none of the charm. I found myself rooting AGAINST him, rather than for him, and spent most of my time completely revolted. I suppose that’s an indication that Oates did her job in making this character so real that he overwhelms the reader, but success doesn’t necessarily lead to enjoyment, and this book left me with the strong desire to take a hot shower and never open it again. 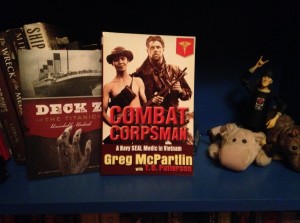 I should have posted this earlier, but my gift swap books arrived from Llp, and they are AWESOME and exactly what I wanted! (There were also delicious chocolates, which I would have photographed too except they are ALL GONE.)

Thanks so much, Llp!

Best wishes to all Cannonballers through the holiday season (or just winter, if you aren’t a holiday person)! I hope to get back on Cannonballing track next year!

Craig Gilner is fifteen, and he wants to kill himself.

He feels like he’s under pressure from every direction, and no one–not his parents, not his teachers at his pre-professional high school, not his best friend to whom everything comes easily, not the girl he has a crush on–seems to understand. The “tentacles” of responsibility and social obligation are tangling through his life and he gets to the point where he can’t even manage to sleep or keep food down. Finally, when it all gets to be too much, Craig checks himself into the psych ward to try and get some help.

I actually saw the movie version of this first, and enjoyed it quite a bit. While the film focuses entirely on Craig’s time in the mental hospital, the book adds in a lot of the time leading up to that. It definitely shows just how Craig ended losing it, but it also expands the role of his family and friends. The first half of the book was basically a lead-up to the second half, which is the time he actually spends in the hospital.

On the whole, I liked this a lot — the main character’s voice is really likeable and seemed authentic to me. I also enjoyed the secondary characters, though I felt like some of them could have been a little more three-dimensional, particularly Noelle, the love interest. She occasionally came out with some interesting dialogue, but I didn’t feel like I got a good sense of her as a person. It’s a good YA book with some interesting turns — but I actually prefer the movie. The character played in the film by Zach Galifianakis, Bobby, is much less important in the book, and I missed him. Craig needed a foil, which the book doesn’t necessarily provide.

As you all know, I’m an avid Civil War buff, and am always on the lookout for a new and interesting slant on things. They Fought Like Demons focuses on women who disguised themselves as males to join in on both sides of the conflict. Though primary sources and also reported anecdotal evidence, the authors demonstrate the methods and motivations of women in the Civil War trenches.

This definitely reads more like an academic paper than a book, but that’s okay. The authors managed to cram in an amazing amount of facts and research into a fairly small amount of space. A lot of it was fascinating, though there were sometimes SO MANY facts that it got a little hard to follow or in a few spots a bit repetitive.

The only thing I found a little questionable was the authors’ adamant denial that any of these women (even the ones who lived as men both before and after the war) were lesbians. While I see their point, which is that women had so few options at the time that some might choose to continue to live as men because they preferred a more independent lifestyle, I think it’s a bit silly to think that none of them would be what today would be referred to as “transgendered”. In all, it’s an excellent piece of research on an overlooked area of history.

(I’ve been really out of the blogging game this year. Not sure why, but I just WAS NOT FEELING IT. I’ve been reading at my usual pace, but the effort needed to get online and write up a blog and then copy it to the other blog and blah blah blah was not making the top of my priority list. So I thought “Well, that’s it for book blogging, I guess.” Then one day, I discovered that as I was finishing books, I was feeling inspired to add a little review blurb over at Goodreads (where I diligently keep track of all my book activities). Nothing major or in-depth, but just a little something to let people know what I thought. As time went on, I thought “Maybe I could copy these little blurbs on my blog? They’re obviously not great criticism, but they’re SOMETHING at least.” So that’s what I’m doing. Take it or leave it, people.)

I find John Waters totally adorable. His gleeful enthusiasm for all things tacky, crude, and macabre makes me think that we would probably get along famously. Role Models is a series of essays, loosely gathered under the theme of “role models” but it’s mostly musings on his twisted way of seeing the world. Whether it’s a heartfelt explanation of his friendship with former Manson girl Leslie Van Houten or an in-depth investigation of the lives of underground gay porn filmmakers, Waters brings a boundless curiosity and a certain amount of sweet affection to all his subjects. He’s unapologetic about his own quirks and flaws, which makes him very understanding of the neuroses of others (unless they don’t read, in which case, “don’t fuck them”).

Although a few of his essays can seem a bit endless (the one about his favorite clothing designer reads a bit like the chapter of American Psycho when Patrick Bateman describes in detail each item of clothing and skin care product he owns) most were glorious little blobs of cheerful crudity and giggling chaos. It’s not for everyone, but if you love his movies, you’ll probably love his books too.

This is a charming little book that The Boyfriend picked up for me while on a business trip to Vancouver. He apparently stumbled upon the author doing a signing, and managed to get a signed copy with a nice dedication for me.

Chuck Bertrand’s voice is pleasant, and he tells stories from his career in the RCMP that vary from humorous to heartbreaking. I really enjoyed this, and felt that Bertrand seems to be the kind of law enforcement officer that everyone hopes for–dedicated to protecting and serving, but with a healthy of dose of humor and common sense.

Although not to everyone’s taste, I found this a quick and sweet read.

In which Siege returns to her horror roots, with both compliments and complaints.