*Warning* If you are afraid of reptiles I’d recommend not reading this book. It will just make you dislike them more.

I picked up “The Care and Feeding of Exotic Pets” because of the title. I had no idea it was about a relationship between a daughter, mother and the mother’s kidnapper who also just also happens to own a seven-foot long iguana named Cookie. Winnie is a single mom, working to support her distant teenage daughter, Lacy. When getting a ride from what she assumes is her rental car, she soon is tossed into a violent struggle for her life from her kidnapper, Oren. Winnie happens to be the daughter of a once famous actress as well as the ex-wife of a popular game show host. But Oren doesn’t seem to want money or connections. He just wants to talk to her, although their communication is highly lacking. The rest of the book flashes between Lacy’s day, unknowing her mom is kidnapped, Winnie’s view and Oren’s view. The chapters written from Oren’s view were the best because his way of thinking was so deranged.

There is quite a bit of violence in this book that made me queasy even though I’ve read worse things. I don’t want to spoil anything, but there is one bit that I was so uncomfortable reading I’m cringing right now just thinking of it. I blame Cookie, the iguana. It was all his fault. (At least, thats what Oren would think, as he never can bring himself to take responsibility for his actions) Although it was hard to read, the use of Oren’s quick physical temper was perfectly executed to help understand his character and motives.

Although being marketed as a game of “cat and mouse” it came across as more of a game of misunderstandings and general dramatic irony. Apparently I was suppose to be surprised with every plot twist, so I think that the dramatic irony might have been unintentional. It was pretty easy to figure out exactly what was going on way before the characters did. I just wanted to shake Winnie and yell “THATS NOT WHY HE KIDNAPPED YOU, STUPID! I KNOW WHAT HE WANTS JUST LET ME TELL YOU!” Clearly she didn’t listen since she wanders about in a daze through most of the book. I love black humor, twisted plots and dark thoughts, which this novel had, but I was unable to fully enjoy those qualities. I probably would have really liked it if I had been left in the dark like Winnie, otherwise its just a stressful mess. Especially the finale with the lizard. Seriously, ew. And I even like reptiles.

“Thats Not A Feeling” is as much as a coming of age novel as it is about nostalgia and lack of direction that teens expect to go away and adults wonder why they still have. It takes place at Roaring Orchards, a boarding school of sorts for troubled kids. Some have anger issues, others drug issues, or just a general need to escape what the “norm” is. The story focuses on the last year of the school, as the founder, Audrey starts to let things fall apart.  The point of view is from a former student, Benjamin in the future reflecting back on Roaring Orchards as he wanders its now empty rooms. He discusses his then growing friendship with a strange girl named Tidbit, the teachers, and his thoughts on Audrey’s attempt at ruling the school.

Roaring Orchard is not your normal boarding school. Audrey’s philosophy is strange and almost inconsistent. Students can be punished by having their furniture “popped” (they then have to sit on the floor) or be stripped of nothing but a sheet and yelled at by their peers. Even the teachers don’t seem to fully understand anymore then the students do on what the “process” is to finally complete schooling.

Overall I enjoyed the meandering storyline, happy to see bits and pieces of the odd boarding school and its occupants. I identified with many of the characters loss of direction. I’m not amazingly far away from high school, but I could recognize a lot of the same feelings I had at the time. But having been through college and now wandering about, I could attest to the teachers as well, working a job they don’t understand and can’t escape because there just seems to be no where else to go. They all hate the place, but secretly like it too much to leave.  Although sarcastic and bitter, Benjamin, and many of its other residents, still has a soft spot for this place.

The downsides to this novel for me was point of view and the ending. Benjamin often comments on events he wasn’t present at.  He does mention hearing about it later from Tidbit, or calling up an old teacher, but I found it jarring since he seemed quite all knowing in the lives of the people at Roaring Orchard.  I also was a little disappointed in the ending. I was waiting for more of an explosion or revelation and excitement as the school finally fell, but it just made me sad and disappointed. From a book with so many quirks, I felt that the ending played much too real to life, with no possibility of tied up ends.  (Also it has a plug from David Foster Wallace on the cover, which I feel is just a silly marketing scheme.)

If you’ve ever enjoyed the film Manic or the novel Skippy Dies, it makes a good companion piece. I think overall Skippy Dies is a better novel at really grasping what its like to “come of age”, but if you want to have that slight longing for a place you both loved and hated, “That’s Not A Feeling” is one for you. 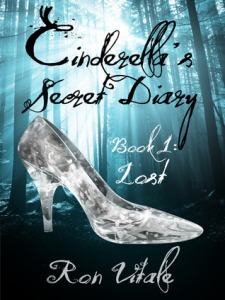 *I was given this book, and its sequel, for participating in the CBR5 if I read and wrote a review for it. *

I was pretty excited to get this book because, A. I love re-written fairytales and B. I love free things. It should have been right up my alley, (Cinderella revisited! War and Magic! Fairies and Witches!) But sadly, it wasn’t quite up to my expectations. I hate to give poor book reviews, but this book was quite the struggle to get through. I’m going to try really hard not to be too spoilery, for those that are still planning to read this book, but warning you now, I’m not really great at keeping spoilers to myself.

It begins after Cinderella has been married to the prince for a few years. She writes in her diary about how unhappy she has become with her life and her distance from the prince. In hopes to get some change, she begs her Fairy Godmother to come save her from her own fairytale life. Her Godmother is unable to help her, due to reasons unknown, so she tries to take matters into her own hands. The queen wants her pregnant in hopes of continuing the family line, but Cinderella is having difficulties in conceiving, so they ship her off to France looking for a way of fixing the problem. There Cinderella starts causing herself more trouble while waiting for her Fairy Godmother to finally reach her.

The whole story is written in diary form from her point of view because she craves to be a writer and a lot of the plot depends on Cinderella’s love of the pen. Although she just wants adventure and a new life, frankly, I found Cinderella to be kind of whiney. She bitches about living in luxury and wants to go to France. Okay I get that. Women in this time didn’t have a whole lot of options and she wants some freedom. That’s understandable. But then she gets to France and quickly it is also too dull for her. Parties all the time? Poetry, music, operas? Ugh, just the worst. I hate to say it but Cindy, your writing isn’t great and your attitude isn’t much better.  Since I didn’t like Cinderella very much, I didn’t care to read her diary very much. In fact, most of the characters didn’t have many redeeming qualities. That was my main complaint with this story. Sometimes characters can be unlikeable, but they can still be someone you root for, someone you want to see turn out alright. For Cinderella, this was not the case. Plus Cinderella’s lack of though, or I guess naivety, drove me nuts. (Really Cinderella? You keep seeing silver foxes all over the place, which just happens to coincided with a story you tell at the beginning of the book and yet you are never suspicious about it? Ever? At all?!)

Things did get better though, and I don’t want to completely trash the novel.  Although I found the first half hard to get through, the second half was much more engaging. The twist, although slightly expected, got me through the end of the book. I finally did want to know what would happen or at least how it would be tied up (which I still kind of had some issues with, since it seemed rushed and possibly all in her head? Or something? I’m not sure, the physical realm/writing/Fey realm got a bit confusing near the end.)  Trying not to spoil too much, but another character writes in her diary and I wish he had written the whole thing. Although clearly insane, and kind of a dick, he was also the most interesting and engaging person in the novel. I’m hoping he shows up in the sequel, because just reading all about Cindy is gonna drag me down.

Due to the writing, I would consider this more for teenagers. It features mostly implied sex, nothing too tantalizing for an actual adult, and the writing is a bit simplistic. (Not implying all teenagers are simplistic, but ya know what I’m saying.)  In the end the message is a pretty good one, about believing and loving yourself instead of looking for validation in other people. I just wish that the message could have been explored more subtly and with a tad bit more character development.

A dear friend of mine, knowing my love of mythical creatures and whimsy gave me the collection of short stories, Zombies vs. Unicorns edited by Holly Black and Justine Larbalestier. The start the anthology by asking the question “Which makes for a better story? Unicorns? or Zombies?.” Every other chapter is marked with a Zombie or Unicorn symbol. There’s also small dialogues of banter between the two editors vying for their side which I actually could have done with out, although it is really the whole point of the book. Also, even though its considered a YA book it has cussing, sex, and even hinted beastiality. So beware if you plan on handing this to someone younger then high school. The overall reading level is on par with YA books, but the content is a little heavy. Though it was kind of strange that all but one of the authors were women. The only male writter is Larbalestier’s husband. So the stories tend to be a little female heavy on the protagonists. (Not that I’m complaining! Its nice to see kick-ass female leads!) But recommending this to a teenage boy might be hard to do.