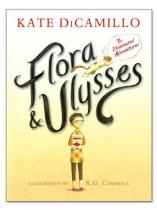 I’ve loved Kate DiCamillo since The Tale of Despereaux: Being the Story of a Mouse, a Princess, Some Soup and a Spool of Thread, which is still one of my favorite books and has one of my favorite lessons on accepting what is rather than trying to force your own skewed sense of reality or what you want to be. So when I heard that she had a new book out, I was on my library’s website reserving a copy of it lickety-split. And though I wasn’t disappointed, Flora and Ulysses was unlike anything of DiCamillo’s that I had previously read.

Titular characters, Flora and Ulysses, are a ten-year-old girl and a flying superhero squirrel who writes poetry, respectively, you see. Well, Ulysses didn’t start out as a flying superhero squirrel who writes poetry. He only became that way when he was vacuumed by Flora’s next door neighbor’s new birthday vacuum. Because…that’s how squirrel’s get superhero powers these days, apparently. (And a patchy buzz cut, but that’s really neither here nor there.) From there, Flora and Ulysses become best friends as she uses her wiles, gleaned entirely from comic books her dad used to read to her, to help Ulysses become stronger and discover who he really is and his place in the world. Along the way, Flora finds her own way, too, with the help of a delightful cast of characters including her best friend, the squirrel she names Ulysses (after the vacuum that attached him, which is very Spiderman of her), the questionably blind little boy William Spiver (don’t call him “Billy”. Bad things happen to automobiles when you call him “Billy”.), his great aunt Tootie (who is also Flora’s next door neighbor who got the vacuum that started this whole thing, Flora’s dad, Flora’s mom, an eccentric neighbor of Flora’s father, an attack cat named Mr. Klaus, and a lifesize shepardess lamp named Mary Ann.

Flora is a delightful young heroine, having many adventures, learning how to navigate the world and her place in it with the help of her best friend is a flying superhero squirrel who writes poetry. Why not? It’s a fantastic story (in many ways literally) that brims with love, excitement, and discovery. She has to battle her nemesis, who is also her mother, but has instructed her dad to kidnap the squirrel, throw him in a sack and beat him with a shovel. BTW, DiCamillo doesn’t pull any punches with her children’s novels. This novel also doesn’t talk down to kids. In fact, they’ll probably learn new words while reading it or having it read to them. Hell, some adults might also. Because I know I needed a refresher on the word “malfeasance”. But for a “kid’s book” it certainly has a lot to say about love, family, and growing up. My favorite two things from the book were:

1. The sentiment Flora’s dad’s neighborlady said instead of goodbye: “I promise to always turn back toward you.”

2. The last poem in the book, written by Ulysses.

Nothing
would be
easier without
you,
because you
are
everything,
all of it –
sprinkles, quarks, giant
donuts, eggs sunny-side up –
you
are the ever-expanding
universe
to me.