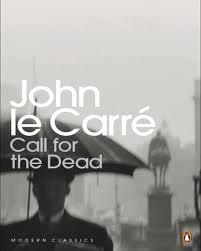 This is an interesting, charming little book. While no classic, it is noteworthy as it is the first outing of David Cornwell as John Le Carré and provides the introduction of George Smiley.

The plot hinges upon a murder mystery, is set against the backdrop of the cold war and features characters we’ll get to know better in the Karla Trilogy. Unlike the later Smiley novels however Call for the Dead is more focused on the solving of a crime than it is international espionage, and reveals much more about Smiley’s emotional life. Fascinatingly this includes his courtship of, marriage to and first estrangement from ‘the demon Ann’, a character who is so absent but so crucial to Smiley’s battle with Karla.

The crime in question is the apparent suicide of a civil servant from the Foreign Office, who kills himself in his Surrey home a matter of hours after meeting with Smiley. Smarting as his boss points the finger, Smiley’s spidey-sense is set a-tingling when his initial interview with the widow throws up more questions than it answers. Working with a policeman who is on the eve of retirement, and the reliably glib Peter Guillam, Smiley  digs deeper and uncovers a conspiracy that goes back to his years as a recruiter in pre-war Germany.

As I said, this is no classic. The writing and plot do show glimmers of the glory that was to come in Smiley’s People (read my review of that here), but the chapter headings, massive chunks of dialogue, and explanatory epistle from Smiley at the end are pretty clunky. It is worth a read though, if only to satisfy any curiosity you may have about Smiley himself.