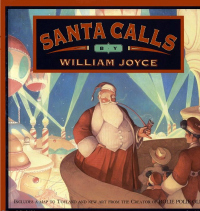 Santa Calls is a gem. As someone who pays attention to books I’m ashamed to admit that I only recently discovered the luscious joys of William Joyce. And that my pick for the Best Christmas Book of 2013 was in fact, published in 2001 *ahem*. William Joyce is a genius writer and illustrator of the first water. And Santa Calls is a gorgeous adventure that is both captivating and completely original.

It starts with a boy named Art.

“Art Atchinson Aimesworth was a very singular boy. Orphaned at an early age by a gang of desperadoes, he had applied himself wholeheartedly to the making of inventions, the quest for adventure, and the fighting and smashing of crime.”

One day, Art, his best friend Spaulding Littlefeets, and little sister Esther find a mysterious box the day before Christmas. They decide to examine it scientifically which involved a stick and some careful poking. A note emerges:

Open the box. Assemble the contents. Come NORTH. Yours, S.C. 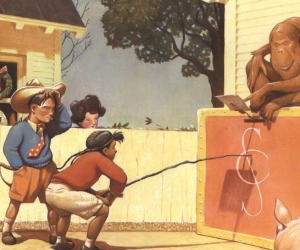 Which, of course, they do (wouldn’t you?). Upon arriving at the North Pole they run into Ali Aku, captain of the Santarian Guard who tries to bring them to Santa before they are waylaid by the Dark Queen and her Dark Elves (note: if naughty kids don’t amend their ways they turn into a Dark Elf.)

“By the moons of Jupiter, this is a swell place,” said Art.

It sure is. Art and crew go on to have lavish adventures in Toyland. Esther is kidnapped by the Dark Queen. A furious licorish battle ensues. The stalwart band of heroes emerge victorious.

“The world is more full of wonders than I ever knew,” he said in a whisper.

Williams Joyce is a fantastic talent and I adore everything he does. Feel free to come check out the full review on my personal blog. Or you can skip it and just enjoy the Oscar-winning short from his book here.