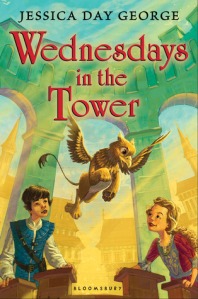 In Wednesdays at the Tower, the castle’s origins are explained. Personally, I preferred not knowing the story behind the castle. You know, since as I said in my last review, that air of mystery, of being partially lost in translation, was the one and only appeal Tuesdays at the Castle had for me.

As far as I’m concerned, George could’ve held off on telling readers what made the castle what it is at least until a third book. Then again, perhaps all she wanted was an excuse to throw a cute, crowd-pleasing baby griffin in there, to deny Celie the help of others, with few exceptions, in raising him, thus making what would probably have been a smooth upbringing otherwise and making it stress filled.

The castle wants Celie to keep this griffin to herself… and a few select others. Anyone else it shuts out, and I mean that literally; Celie even thinks of telling her parents and doors don’t just close, they disappear. What could be the explanation?

Hm, griffins are all around Castle Glower. Do you think it could have something to do with its past? No, don’t speak such poppycock. It can’t be that simple. Nope, wait, it is. Through this griffin appearing (seemingly) at random, all your questions are answered. I say “your questions,” since there are a couple I had that George’ll probably leave unanswered. Put simply, I’d like the backstory to the backstory, but I doubt it’s forthcoming.

Which is most likely for the best; I wouldn’t want to go against my better judgment once more and read another book in this series, and I know I would if there were a third. So, in a way, I’m glad George (presumably) ended it here in the second book. She got the letdown out of the way before anticipation had built my hopes for the resolution up very high at all. Thanks to that, these two books of hers will be some of this year’s forgettable footnotes, rather than stand-out disappointments like, say, You Suck and Bite Me by Christopher Moore, which took a promising introduction in Bloodsucking Fiends and pile-drived it, leaving it so thoroughly concussed that it, and Moore apparently, no longer knew what it was. So, yeah, I’m thankful that George at least managed to inadvertently avoid that.